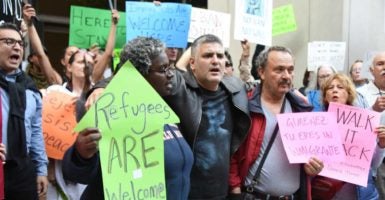 President Donald Trump’s executive order defunding sanctuary cities has been widely praised by Republicans in Congress, but one congressman wants to do more to encourage enforcement of immigration laws.

Rep. Lou Barletta, R-Pa., said in a press release addressing Trump’s executive order, “It is wonderful to finally have an ally in the White House.”

Trump’s executive order, posted to the official White House website, states that the attorney general and secretary of homeland security “shall ensure that jurisdictions that willfully refuse to comply … are not eligible to receive federal grants, except as deemed necessary for law enforcement purposes by the attorney general or the secretary.”

“I view the president’s executive action as just a starting point, however, as I will be pushing my own legislation that would remove all federal funding—not just certain grants—from sanctuary cities who refuse to obey the law,” Barletta said in the press release.

The bill will block federal funding to any state or local government for a minimum of one year, and “directs the attorney general to compile an annual list of such cities and issue a report on any particular state or locality upon request from a member of Congress,” Barletta’s press release explained. The state or local government can only regain federal funding once the attorney general certifies that they are following federal immigration law, as stated in a separate press release addressing the bill.

This marks the third time Barletta has introduced this bill, as he first introduced it in 2011, and then again in 2015. In his press release, he says the bill “will stop all federal funds from flowing to states or localities which resist or ban enforcement of federal immigration laws, or flatly refuse to cooperate with immigration officials.”

Sanctuary cities pose a serious threat to the sovereignty of federal immigration law, according to Barletta.

In an article published in 2015, The Washington Times reported that there are more than 340 sanctuary cities across the United States.

Barletta went on to add that “too many mayors and local governments think that they are above federal law and place their own ideology ahead of the safety of their residents.”

Barletta said he was inspired to first introduce this legislation in 2011 after witnessing the damaging effects of sanctuary cities. When Barletta was mayor of Hazleton, Pennsylvania, a local father of three was murdered by an illegal immigrant “who had been released by law enforcement a number of times, including by the sanctuary city of New York,” according to Barletta’s press release.

A StandUnited.org petition with the same aspiration as Barletta’s bill has received tremendous support within the past several weeks. The petition has over 15,000 signatures and counting. StandUnited’s senior campaign organizer, Angela Morabito, said she believes this petition will help keep Congress in check.

“Every signature is one more person telling Rep. Barletta and his colleagues, ‘Hey, we’re watching, because we want you to get this done,’” Morabito told The Daily Signal.

The petition, created in September 2016, has gained momentum, according to Morabito.

“[The petition] shot up suddenly, we’re talking several thousand [signatures] overnight with President Trump taking office, because people have realized that this is a huge possibility for something that could become law,” Morabito said.