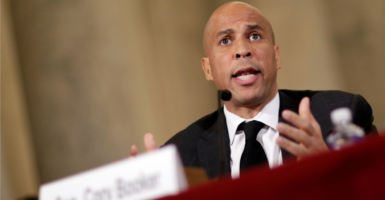 Sen. Cory Booker joined all of his Democrat colleagues in the Senate and voted against confirming Betsy DeVos, a school choice advocate, as education secretary. (Photo: Joshua Roberts/Reuters/Newscom)

Sen. Cory Booker, who has been an outspoken critic of Betsy DeVos, once spoke at an event organized by a school choice group she led.

In 2012, during a keynote address for an event hosted by the American Federation for Children, an organization DeVos chaired at the time, the New Jersey Democrat made the case for school choice.

“I cannot ever stand up and stand against a parent having options, because I benefited from my parents having options,” Booker said at the time, “and when people tell me they’re against school choice, whether it’s the Opportunity Scholarship Act or charter schools, I look at them and say, ‘As soon as you’re telling me you’re willing to send your kid to a failing school in my city, then I’ll be with you.’”

On Tuesday, Booker joined all of his Democrat colleagues in the Senate and voted against confirming DeVos, a school choice advocate, as education secretary. He previously had said he had “serious concerns.”

“I have long-supported targeted, accountable school choice initiatives … but there are a number of departures between Mrs. DeVos’ policy beliefs and mine that prevent me from supporting her,” said Booker in a January statement his office sent to The Daily Signal when asked for comment.

During his tenure as mayor of Newark, New Jersey, Booker served on the board of the Alliance for School Choice with DeVos, according to NJ.com, which also reported that “Booker’s advocacy of school choice put him in conflict with the Newark Teachers Union, which opposed his 2010 re-election as mayor.”

The Alliance for School Choice is the “educational partner” of the American Federation for Children, and “a 501(c)(3) organization to promote the benefits of—and the need for—school choice,” according to the federation’s website.

In a 2016 address to the American Federation for Children, Booker said, “We have a lot to brag about in Newark, in this cauldron of educational creativity we’ve created, that has been liberating the choice of our parents. As the Brookings Institution said, Newark is now the No. 4 city in the country for offering parents real school choice.”

In his 2012 speech to the federation, Booker highlighted how some politicians opposed school choice, yet sent their own children to private schools.

“And now you want to deny that to my community? No, I am going to fight for the freedom and the liberty and the choice and the options of my people, the same way you will defend that right for yourself,” Booker said.

DeVos was confirmed Tuesday after Vice President Mike Pence cast the deciding vote in her favor.