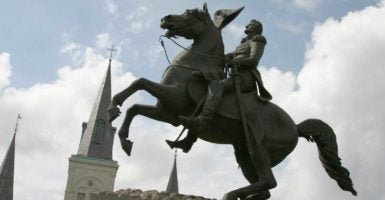 Sometimes, an old media fabrication is used to justify a new one. Such is the case with the response to President Donald Trump’s executive order on refugees that created a firestorm on Saturday.

Several courts ordered a halt to provisions of Trump’s order, prompting members of the media to speculate that this could create a constitutional crisis in which Trump disobeyed the courts.

Some have even suggested that Trump and his supporters are using the comparisons to Andrew Jackson, America’s seventh president, as a justification for ignoring court decisions.

Trump folks keep citing Andrew Jackson as a model and he did, famously, straight up defy a SCOTUS ruling so he could commit ethnic cleansing

While Jackson’s role in Indian removal was complex, one thing is for certain: Jackson never defied or violated a Supreme Court ruling. This idea has unfortunately been passed down by an unverified and likely fabricated quote from a member of the anti-Jackson press in the 1830s.

The Cherokee tribe’s creation of a new constitution in 1827 initiated a conflict over sovereignty. The Cherokee tribe was thrown into a legally tenuous situation with Georgia, which was desirous of Cherokee land and resentful of such a large part of the state’s territory falling under a separate jurisdiction.

Jackson, who had favored a policy of removing tribes to the western territories, sided with Georgia in the confrontation. He believed Georgia and all states should have been given latitude in how they dealt with tribal governments.

This was fairly consistent with his view that most domestic policy should be set by the states, not the federal government.

>>>The Media Have It Wrong: Andrew Jackson’s Legacy Was Fighting Crony Capitalism

This clash between governments came to a head in a series of Supreme Court cases involving the Cherokee and two missionaries arrested by Georgia for “illegally” crossing onto tribal land.

In the famous case Worcester v. Georgia, Chief Justice John Marshall ruled that Georgia laws dealing with the Cherokee should be null and void, and that all legal interactions with Indian tribes must be exclusively under federal jurisdiction.

However, due to the technical language in the Judiciary Act of 1789, Marshall’s decision was unenforceable by law. The court couldn’t compel the Georgia government to act and release the missionaries. The decision was more of a statement of principles rather than a legally binding judgment.

But anti-Jackson partisans in the press howled with rage over the result. Famous New York editor Horace Greeley angrily remarked that Jackson had said, “John Marshall has made his decision, now let him enforce it,” thus giving credence to the idea that the president was openly disobeying the Supreme Court.

But this quote has never been traced to Jackson, and was likely made up or misinterpreted by Greeley. What Jackson actually said is “the decision of the Supreme Court has fell still born, and they find that it cannot coerce Georgia to yield its mandate.”

Under the precedent of the time, Jackson was legally correct.

Law professor Gerard Magliocca noted how this story has been distorted and that the consensus among historians is that Jackson followed the letter of the law. He wrote:

Notwithstanding the myth that Jackson said, ‘John Marshall has made his decision; now let him enforce it,’ in reality there was nothing to enforce. One could say the president had a moral obligation to persuade Georgia to obey … But the president had no legal duty to act.

And so this story, concocted to attack Jackson, has now been pulled up by modern partisans to throw at Trump.

While Trump rightly fired his acting attorney general who refused to carry out his executive order on refugees, there has been no indication that the administration will openly oppose court decisions.