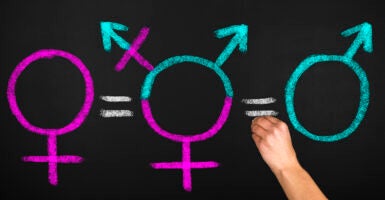 Some school districts have conspired to promote transgenderism to kids while hiding it from their parents. Now, parents are taking them to court. Pictured: Gender and transgender symbols. (Photo: Marrio31/Getty Images)

If you sent your 9-year-old daughter to school and she broke her arm playing on the playground, but the school didn’t tell you, that would be grounds for a harsh conversation with administrators, if not a lawsuit, right?

There are school policies and state and federal laws that outline parameters for transparency between parents, students, and schools. They are meant to protect everyone, but particularly the child, and they are rooted in the idea that parental authority is paramount, even in schools. Yet this fundamental concept seems to be corroding under the guise that woke schools and teachers know best.

In Pennsylvania recently, three parents filed a federal lawsuit alleging that their children’s first grade teacher violated their rights, not to mention school policy and state law, by teaching their children about “gender dysphoria and transgender transitioning.”

In this case, “transgender transitioning,” while not physically possible, refers to using drugs or surgery to make the body appear as the opposite sex from which a person was born.

Carmilla Tatel, Stacy Dunn, and Gretchen Melton are all mothers speaking out against the Mount Lebanon School District. In their lawsuit, which names multiple school administrators and first grade teacher Megan Williams, the mothers are seeking a court order to either stop the gender-related instruction at Jefferson Elementary School in Pittsburgh or provide parents the ability to opt their children out of it.

In essence, it sounds like the school was taking advantage of kids who were confused about their gender—experiencing dysphoria—and was encouraging them to adopt the qualities of the opposite sex, like changing their names and using a different bathroom.

It turns out that Williams herself is the mother of a “transgender” child who is also in first grade. Still, the mothers point out in the lawsuit that this does not “give her the right to impose those views on a captive audience of six- and seven-year-old children.”

According to the lawsuit, Williams had gone so far as to tell students that sometimes “‘parents are wrong’ and parents and doctors ‘make mistakes’ when they bring a child home from the hospital” and declare that he or she is a boy or a girl.

This section of the plaintiffs’ filing encapsulates the entire lawsuit and the problem with this case and those like it:

These Pennsylvania moms are not alone.

A California mother filed a similar lawsuit in Monterey County because in 2019, before the COVID-19 pandemic, teachers at her sixth grade daughter’s school recruited the middle schooler to join an “Equality Club” where she was told she may be transgender and bisexual—two things she knew nothing about before this club.

Two seventh grade teachers created the club for students “who they believed might be receptive to ideas such as homosexuality, bisexuality, transgenderism, gender nonconformity, etc.”

Teachers and school administrators encouraged Jessica Konen’s daughter to change her name to a boy’s name and then “specifically instructed her not to tell her mother about her new identity because her mother couldn’t be ‘trusted.’” Together, school staff convinced the middle school-aged girl she was bisexual and later, transgender.

Without Konen’s knowledge, teachers and administrators created a “Gender Support Plan” and told faculty to call her daughter by her new male name and to let her use the unisex teachers’ restroom. It was only after months had passed that Konen was made aware of what her daughter had been experiencing and what the school had been doing without her knowledge or consent.

In this specific case, Konen maintains she would have gladly supported her daughter’s gender struggles—if only the school had been transparent. Ironically, during the COVID-19 pandemic and throughout remote learning, Konen’s daughter, now released from the influence of school staff, no longer agrees she is bisexual or transgender.

The right of parents to maintain authority over their children while at school is a constitutional one that’s also protected by state and federal law. The U.S. Supreme Court has held that the “liberty” protected by the due process clause includes the right of parents “to control the education of their [children]” and that the “liberty of parents and guardians” includes the right “to direct the upbringing and education of children under their control.”

That schools perpetuate gender identity issues among first graders and create gender equality clubs aimed at 11-year-olds is bad enough. Kids this age are often too young to even be aware of their gender, to say nothing of whether or not they are uncomfortable with it.

Studies show that while gender dysphoria is real, helping a child embrace an opposite gender is not the best approach, but rather the best approach is to “wait and see.” Historically, gender dysphoria is a rare condition that dissipates as the child ages and goes through puberty. The fact that both of these school districts conspired with kids against their parents when these kids needed their parents the most is abhorrent.

Regardless of what parents, teachers, or students think about this issue in general, parents should have ultimate authority over how to treat their child, provided they are caring and kind. And parents should continue to fight back against school systems that undermine their rights using shrouds of secrecy in an attempt to substitute the schools’ judgment for the judgment of those who truly have the best interest of their children at heart.