3 Examples of How Pervasive Transgender Ideology Has Become 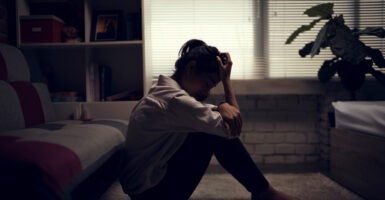 Transgender ideology has become pervasive in society. It will only become more so if the Equality Act becomes law. (Photo: Torwai/iStock/Getty Images)

Even before the Senate considers the so-called Equality Act passed by the House, it’s important to realize just how pervasive (and harmful) transgender ideology already has become in society. It will only become more so if the bill becomes law.

Here are three examples of the impact of the transgender worldview on young people, in sports, and in medicine.

Bell was 16 when she was referred to the Tavistock and Portman National Health Service Foundation Trust, which operates what is billed as the U.K.’s only “gender-identity development service.” There, she received little counseling but was prescribed puberty blockers after three one-hour appointments. When she was 20, she had a double mastectomy.

In a December interview with the BBC, Bell, now 23, said:

I was definitely very depressed and anxious, and … strongly disliked my body and just all the intricacies that come with being the female. …

The discussions were very brief, and there was no real investigation into why I had gender dysphoric feelings, and how I got to that stage.

I spoke briefly of depression and anxiety, but again, it was kind of assumed by everyone that transitioning would alleviate that.

After receiving puberty blockers and getting the mastectomy, Bell soon realized she remained dissatisfied and eventually sued the Tavistock and Portman National Health Service Foundation Trust.

The High Court of Justice’s ruling on the case, released in December, shocked transgender advocates.

It is highly unlikely that a child aged 13 or under would be competent to give consent to the administration of puberty blockers.

It is doubtful that a child aged 14 or 15 could understand and weigh the long-term risks and consequences of the administration of puberty blockers. …

Given the long-term consequences of the clinical interventions at issue in this case, and given that the treatment is as yet innovative and experimental, we recognize that clinicians may well regard these as cases where the authorization of the court should be sought prior to commencing the clinical treatment.

While many in the U.K. and beyond applauded the ruling, there were also critics, so pervasive is the movement to normalize the prescribing of puberty blockers for minors.

The High Court ruling also said: “We consider that it would be appropriate for clinicians to involve the court in any case where there may be any doubt as to whether the long-term best interests of a [16- or 17-year-old] would be served by the clinical interventions at issue in this case.”

This particular court didn’t even explore the actual effects of puberty blockers, cross-sex hormones, or surgery, but rather focused on whether or not a child under 16 could understand enough about them to give consent.

A U.S. case, this one regarding athletics and transgender ideology, is similarly compelling.

A federal court in Connecticut held a hearing Feb. 26 in which four female track athletes argued for fair play and against being forced to compete against biological males who “identify” as females.

The American Civil Liberties Union filed a motion to dismiss the case, but lawyers for the athletes from Alliance Defending Freedom, a Christian legal organization, argued that allowing so-called transgender women to compete against biological women violates the federal law known as Title IX.

Selina Soule, Alanna Smith, Chelsea Mitchell, and a fourth plaintiff who chooses to remain anonymous repeatedly have been bested by transgender women in major track competitions, despite being at the top of their game.

Soule is now running track at a Division 1 college, but said on a press call that she remains “disappointed” in Biden’s executive order mandating that schools receiving federal funds allow transgender women to compete in girls athletics. Soule continues to argue that that’s unfair.

Christiana Holcomb, one of the lawyers on her case, said in an email:

Laws must respect freedom and promote justice for every citizen, no matter who they are. Title IX was created to ensure equal opportunities for women in education.

Our clients have already lost races, state championships, and opportunities to compete at the highest level. Our laws should recognize the biological differences between men and women; by ignoring those differences, the ‘Equality Act’ could make Connecticut’s disastrous policy a nationwide reality.

A third case, this one about conscience protections for medical professionals, has been simmering in the United States. It is emblematic of just how extensively the transgender agenda has infiltrated health care in America.

At a hearing March 3, lawyers from Becket Law, another public interest legal firm, represented a faith-based group of hospitals and doctors. They want to be released from the Obama administration’s transgender mandate, which forced them to perform “gender transition” procedures even if they believed the procedures to be damaging.

Lawyers at Becket are defending people of faith in Franciscan Alliance v. Cochran. In a tweet thread, Luke Goodrich, the lead attorney on the case, wrote:

Gender transition procedures are hotly disputed within the medical community. Many believe they are deeply harmful—especially when performed on children, who almost always overcome gender-identity struggles as they mature. …

The plaintiffs in this case are religious doctors and hospitals that joyfully serve all patients, regardless of sex or gender identity. Based on medical expertise, they believe transition procedures are harmful and can’t in good conscience perform them.

Goodrich tweeted that the court asked the government’s attorney point blank: “Does the new administration have plans to go after these religious doctors and hospitals?”

Sometimes, legislation with vague titles such as the Equality Act can sound like a good idea. But people need to know how such bills could actually affect Americans’ lives.

These three cases demonstrate dramatically just how children, sports, and medicine—and, by extension, the rest of us—are affected by the transgender agenda.