Our Economy Is Barely Growing. Here’s 4 Steps We Can Take to Change That. 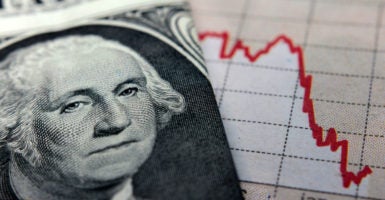 The U.S. economy grew at a lackluster 1.9 percent in the fourth quarter of 2016, wrapping up the year with an overall growth rate of just 1.6 percent. (Photo: iStock Photos)

Late last week, we were reminded of how much work needs to be done to clean up the mess President Barack Obama left when the Bureau of Economic Analysis announced the economy grew at a dismal 1.9 percent in the fourth quarter—wrapping up 2016 with a growth rate of just 1.6 percent.

This growth is a pittance compared to the historic average of 3.3 percent.

Examining these numbers, and several other factors, it is clear that Obama and the mainstream media’s recent attempt to convince America that we have a thriving economy is farcical at best.

It is unsustainable, and if the course isn’t changed, growth will continue to be underwhelming.

By adhering to traditional principles of economic freedom, such as balancing budgets, cutting wasteful spending, minimizing regulations, and lowering tax rates while broadening the tax base, the United States can begin to reduce its debt, grow its economy, increase prosperity, and provide the economic leadership the world so desperately needs.

>>> Check out The Heritage Foundation’s “Blueprint for Reform.”

The nation has an incredible opportunity to move away from Obama’s Washington-first economy and toward policies that empower American individuals and businesses. An agenda that strives to maximize economic freedom will not only spur growth and increase prosperity, but give individual Americans the economic wherewithal to establish their own futures.

The Heritage Foundation has such a plan, and it includes the following measures:

1. True regulatory reform. The regulatory onslaught of recent years makes investing in America a riskier proposition than it should be. Regulations have increased so much they could be costing business as much as $2 trillion annually. States such as Indiana, Ohio, and Texas have had great success with this approach. Why not bring it to Washington?

Reversing this trend by requiring congressional approval for all major regulations is step one to bringing back strong economic growth. Each regulation should be scrutinized and run through business impact analysis. The president and Congress should work together to juristically reduce the regulatory burden on private citizens and business.

By doing this, America will not only become the world’s energy leader, but it will create well-paying jobs and spur much-needed capital investment.

3. Repeal and replace Obamacare. Take on true entitlement reform by repealing and replacing Obamacare with a less costly and more choice-oriented alternative. This year alone, Obamacare premiums are rising 25 percent on average, and in many states the premium increase and deductibles are shockingly higher. In addition, 70 percent of counties’ enrollees only have one or two choices.

Liberalizing insurance rules for individual and small group markets, enabling small business owners to band together to shop for plans across state lines, provide individual tax relief for those not insured by employers, and more easily allowing employers to alter or modify their plans, will create great access and lower costs for all Americans.

This is a far cry from Obama’s promise to dramatically expand competition. After almost seven years of experience, Obama’s initial promise to lower a family’s typical annual health care cost is now laughable.

4. Expand the freedom to trade. One of the greatest opportunities for growth rests in the power of comparative advantage, and our nation’s ability to promote and strengthen trade relations abroad. Absent national security concerns, individuals and businesses should be allowed to buy and sell to whom and from whom they choose without government intervention.

Washington should help facilitate these commercial interactions by identifying barriers to free economic exchange and eliminating them. This includes repealing harmful barriers such as the maritime Jones Act, endorsing economic freedom in the Arctic, and increasing production and exporting oil and natural gas.

In President Abraham Lincoln’s address to Congress in 1862, he spoke of having fortitude and determination in the face of difficult opposition. He said:

The dogmas of the quiet past are inadequate to the stormy present. The occasion is piled high with difficulty, and we must rise with the occasion. As our case is new, so we must think anew, and act anew. We must disenthrall ourselves, and then we shall save our country.

Our modern challenges are great, and it is sad that our leaders have not risen to the occasion to address these. It will take guts and an iron will to take the necessary steps to bring our country back to fiscal sanity and growth.

The time for excuses is over. We know what works, and that is precisely what The Heritage Foundation lays out in its “Blueprint for Reform.”