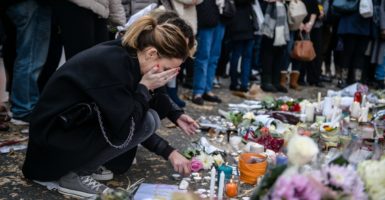 People lay flowers and candles in front of the memorial set near the Bataclan concert venue in Paris, France, in 2015. One hundred and thirty people were killed and hundreds injured in the Paris terror attacks. (Photo: Christophe Petit Tesson/EPA /Newscom)

Read any commentary on the just signed executive order on visa and refugee vetting from several countries in the Middle East and odds are the assessment will tell you more about the writer’s politics than be an analysis of the order.

I confess: I have a perspective as well. Mine comes from working on the presidential team on both foreign policy and homeland security from after the Republican convention up to the inauguration. I can’t share the detailed workings of the team. But what I can share, having worked on the issues, is what I believe guided the work.

And it all started with making America safe.

Not campaign promises, anger at any religion, or prejudice of any kind impacted our thinking on the transition team. What we were worried about were future threats.

As the space for the Islamic State, or ISIS, gets squeezed in the Middle East, the remains of the tens of thousands of foreign fighters will have to flow somewhere. Every nation, not just the U.S., believes they are most likely to flow to the countries cited in the order. That fact, and only that fact, is why those countries are included on the list. Indeed, when it comes to visa vetting, that’s why the European Union has restrictions that are comparable to the United States.

The reason why we all worry is because, from those countries, foreign fighters could well try to flow to the West, principally by using visas or posing as refugees. When they get to the West, they could carry out terrorist acts. We know that because they already have—specifically in Western Europe.

They haven’t come to the U.S.—yet. Right now, our primary threat is Islamist-related terror plots that are organized by terrorists who are already here.

What this administration is doing is making sure we are ready for the next wave of terrorism as well—the outflow of terrorists from the countries of conflict where the foreign fighters are likely to go first.

There are already cries that the precautions are unfair—creating hardships. Fair enough, but terrorists attacks (like those at the Bataclan in France by the followers of ISIS) create unbearable hardships as well—and the government has the responsibility to find the right balance between security and compassion for its citizens as well as consider how U.S. actions impact others around the world.

One area where the order tries to get that balance right is to ensure future refugee processing prioritizes addressing the plight of religious minorities. That is particularly crucial in the Middle East where the remnants of the region’s Christian communities are under severe threat.

Worldwide persecutions against Christian minorities have been rising for four straight years. It’s particularly problematic in the Middle East. The administration is making an extra effort to address that crisis.

While critics will continue to demonize the administration’s policies because they don’t fit their politics, Americans who crave a foreign policy that prioritizes American interests, puts a compassionate face on statecraft that reflects our values, and acts responsibly will find much to respect in the order.