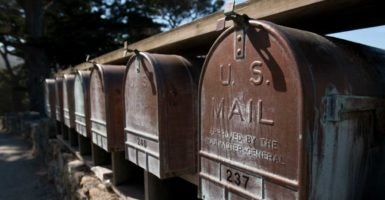 Courts have begun to restrain the growing scope of federal criminal law in certain areas, which often overlap with state laws. Several recent cases have checked the government for overstepping its bounds.

As the court stated, “[t]he defendants abused the hiring process to ensure that favored candidates were promoted or appointed in exchange for favorable budget treatment from the state legislatures and increased control over the Probation Department.”

Throughout the entire interview process, “various members of the Probation Department ensured that the individuals recommended by legislators and other high-ranking officials secured their desired positions.”

After an independent counsel had uncovered the scheme, state officials cracked down on O’Brien and Tavares. They ultimately resigned under mounting political pressure. Burke had previously retired.

Lest anyone question that this was politics as usual, O’Brien was originally elevated to the top of the probation office with help from his own friends in high places. The government subsequently charged them with violating the Racketeer Influenced and Corrupt Organizations Act (known colloquially by its acronym, RICO) and the mail fraud statute.

The court acknowledged that the defendants’ conduct “may well be judged distasteful, and even contrary to Massachusetts’s personnel laws,” but concluded that they did not violate federal criminal statutes.

The United States Supreme Court has consistently made clear, as in Schmuck v. U.S. (1989), that while the federal statute (18 U.S.C § 1341) defining mail fraud is interpreted broadly, it requires not only proof of a scheme to defraud, but also that the use of the mail be “in furtherance of the fraud.”

The Supreme Court has also warned in several cases, including in Skilling v. United States (2010), against interpreting federal fraud statutes “in a manner that leaves its outer boundaries ambiguous and involves the Federal Government in setting standards of disclosure and good government for local and state officials.”

In another case of political impropriety, one concerning a trade association bestowing gifts on politicians, the late Supreme Court Justice Antonin Scalia cautioned that “a statute in this field that can linguistically be interpreted to be either a meat axe or a scalpel should reasonably be taken to be the latter.”

We don’t accuse someone of federal mail fraud because they stop to send a Christmas card in the midst of a local fraud scheme. As the court wrote in Kann v. United States (1944), “[t]he federal mail fraud statute does not purport to reach all frauds,” it only reaches “those limited instances in which the use of the mails is a part of the execution of the fraud, leaving all other cases to be dealt with by appropriate state law.”

Federal prosecutors in Massachusetts did not heed the Supreme Court’s warnings when it came to O’Brien’s case. Instead, they filed mail fraud and other criminal charges against him and his deputies because their office sent and received routine business letters through the mail, such as appointment letters, and rejection letters to unsuccessful candidates.

Rejection letters were mailed out in the ordinary course of operations to candidates that the office passed over, regardless of whether a hire was made based on political patronage or otherwise following standard hiring practices.

O’Brien did not raid the treasury, receive a kickback, or derive any other personal benefit from the hiring scheme. Nonetheless, O’Brien and his co-conspirators were found guilty at trial. On appeal, the U.S. Court of Appeals for the 1st Circuit reversed their convictions, and gave the government a stinging rebuke for filing criminal charges based on “rank speculation” and “insufficient evidence.”

The Court of Appeals rejected the government’s ambiguous argument that mailing letters amounts to federal mail fraud if they “help to maintain a facade of a merit-based system.” The mailing itself, the court noted, was “a courtesy to unsuccessful applicants,” and “not sufficiently tied” to the alleged misconduct.

The court reiterated the limited role of courts and prosecutors in defining whether a person’s conduct violates the plain meaning of a criminal statute.

In 1998, Edwin Meese, former attorney general under President Ronald Reagan, chaired an American Bar Association Task Force on the Federalization of Criminal Law, which issued a report concluding that there were too many federal criminal laws that significantly overlap with crimes traditionally prosecuted by the state.

The report says that this “phenomenon is inconsistent with the traditional notion that prevention of crime and law enforcement in this country are basically state functions.”

This sentiment does not reflect the original purpose and clear boundaries of the mail fraud statute. As the Supreme Court has consistently made clear, the federal mail fraud statute should be read to protect property rights, not police local politics.

In that regard, the 1st Circuit Court of Appeals’ opinion in Tavares echoes the Supreme Court’s recent pronouncement in McDonnell v. United States (2016), which concerned a drug manufacturer’s gifts to former Virginia Gov. Bob McDonnell as part of an effort to get McDonnell to promote his products.

There, the Supreme Court wrote that “our concern is not with tawdry tales of Ferraris, Rolexes, and ball gowns. It is instead with the broader legal implications of the government’s boundless interpretation of the federal bribery statute.”

As the 1st Circuit explained in the O’Brien case, “the Government overstepped its bounds in using federal criminal statutes.” The court in this instance deserves credit for faithfully applying the law to the facts and for shrinking an expansive federal criminal law back down to size.