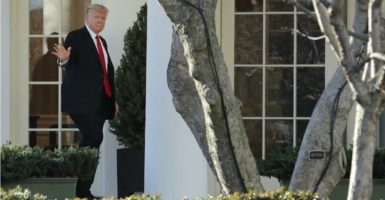 President Donald Trump returns to the White House Wednesday after a visit to the Department of Homeland Security. Trump says that he plans to ask for a major investigation into voter fraud. (Photo: Polaris/Newscom)

Trump has said that more than 3 million to 5 million illegal votes were cast during the 2016 election, causing him to receive a lower popular vote total than his vanquished opponent, Hillary Clinton, whom he defeated in the Electoral College.

I will be asking for a major investigation into VOTER FRAUD, including those registered to vote in two states, those who are illegal and….

even, those registered to vote who are dead (and many for a long time). Depending on results, we will strengthen up voting procedures!

One legal organization took action on preventing voter fraud this week. The Public Interest Legal Foundation, a voter integrity group, reached a consent decree with Noxubee County, Mississippi, which has had voter registration that exceeds the number of county residents since 2011, according to the group. A consent decree is a legal agreement between two parties without an acknowledgment of guilt.

The decree includes requiring the county to identify dead voters on the rolls, clear voter rolls of former county residents, and mail all registered voters who have been inactive since January 2011.

“They know the jig is up,” @TomFitton says.

The Public Interest Legal Foundation this week is also seeking to pry the release of information about noncitizens registered to vote in Manassas, Virginia.

Logan Churchwell, spokesman for the Public Interest Legal Foundation, said it is good that the Justice Department won’t just leave it to the nonprofit groups to weed out fraud.

“We need to know how many noncitizens are voting and know the unknowns,” Churchwell told The Daily Signal. “Trump could just enforce the law. The giant research project he tweeted about, or had a series of tweets about, is worthwhile and only something the federal government could do.”

It’s likely that 800,000 noncitizens illegally voted in the last presidential election, according to Jesse Richman, an associate professor of political science at Old Dominion University, who extrapolated on a 2014 study that examined illegal voting in the 2008 and 2010 elections.

Before the 2016 election, there were several documented cases of voter fraud. These included an FBI probe that found 19 dead people were registered to vote in Harrisonburg, Virginia; a woman arrested in Des Moines, Iowa, for voting twice for Trump; and a CBS News investigation that found multiple cases of dead voters and double voting in Colorado.

Churchwell asserted Trump’s 3 million or more projection couldn’t be proven or disproven, but regardless of whether this is an overstatement, President Barack Obama’s Justice Department ignored Section 8 of the National Voter Registration Act, better known as the “motor voter” law. This provision requires local governments to maintain and keep voter rolls current.

The Obama administration has not enforced this provision of the motor voter law, and in Florida, Wisconsin, and Ohio, even took action to prevent maintaining the voter registration rolls.

Still others, such as Michael Waldman, president of the Brennan Center for Justice, a liberal legal group at the New York University School of Law, insisted voter fraud is a myth and opposed an investigation.

“An expensive investigation of imaginary voter fraud is not needed. It could easily devolve into a witch hunt,” Waldman said in a public statement. “Worse, it could be used to justify sweeping voting restrictions. There is no need for another investigation that is not independent, rigorous, and fact-based.”

There is a great deal of evidence that our voting system locks out far too many eligible citizens from voting. The voter registration system needs an upgrade, and that is something that should unite all Americans. Errors on the voter rolls are emphatically not signs of fraud—they are signs that we need to improve the system.

An investigation into voter fraud would not be complicated, said Tom Fitton, president of Judicial Watch, a government watchdog group.

“You can see the numbers we are talking about by looking at public voter registration lists and cross-checking that against a list of noncitizens,” Fitton told The Daily Signal. “The federal government could coordinate with state and local governments and determine who registered to vote illegally. It’s a simple process. That’s why the left is so upset. They know the jig is up.”

“We don’t need [to create] a commission. The Justice Department can enforce the law and work with the Department of Homeland Security, and its records for citizenship and change of status to get an idea of who is illegally registered to vote,” von Spakovsky told The Daily Signal.

Regardless of the investigation’s outcome, von Spakovsky expects critics will dismiss anything that falls short of Trump’s 3 to 5 million illegal voter estimate.

“They may try to dismiss this, but the American people don’t believe what the media say about voter fraud not being real,” von Spakovsky said. “Polling solidifies that.”