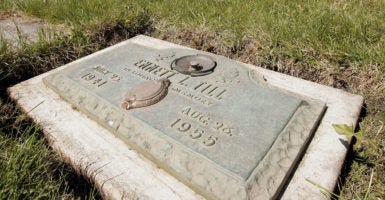 A plaque marks the gravesite of 14-year-old Emmett Till at Burr Oak Cemetery May 4, 2005, in Alsip, Illinois. Till was murdered in 1955 in Money, Mississippi, after whistling at a white woman. (Photo: Scott Olson/Getty Images)

The Justice Department is investigating a photo of three Ole Miss students holding guns in front of a memorial dedicated to Emmett Till, CNN reported.

The three University of Mississippi students were suspended from the school’s Kappa Alpha fraternity chapter after the photo, obtained by the Mississippi Center for Investigative Reporting and ProPublica, surfaced last week.

The now-viral image shows the men holding rifles in front of a sign in Glendora, Mississippi, dedicated to Till.

Till was 14 years old when he was tortured, killed, and thrown into the Tallahatchie River in the Mississippi Delta after being accused of flirting with a white woman outside her family’s grocery store in 1955, adding fuel to the civil rights movement in the 1960s.

“For (many?) white Deltans, having Emmett Till physically on their landscape is maddening, perhaps even provocative,” Davis Houck, a professor of communication at Florida State University who helped lead the Emmett Till Memory Project, told The Daily Caller News Foundation.

“But several [Deltans] I’ve interacted with over the years simply don’t know the correct history—who Emmett Till was, what he did, what was, in turn, done to him, and the basic history of the case. Minus that factual information, whites and blacks, especially in the Delta, have an awfully hard time talking with each other,” Houck said.

The memorial, which Houck says “has been vandalized almost from the day it was first planted into the Delta dirt,” appears to be covered in bullet holes in the photo, which got hundreds of likes on Instagram, according to ProPublica.

The Emmett Till Memorial Commission, which owns the Emmett Till Museum in Glendora, issued a statement Thursday saying: “Our signs and ones like them have been stolen, thrown in the river, replaced, shot, replaced again, shot again, defaced with acid and have had KKK spray painted on them. The vandalism has been targeted and it has been persistent.”

The amount of ignorance it takes to see Emmett Till’s death as something worthy of disrespect is staggering. https://t.co/QBoVESRPUl

“We believe it is important to keep a sign at this historic site, but we don’t want to hide the legacy of racism by constantly replacing broken signs,” the statement continued. “The commission hopes this sign will endure, and that it will continue to spark conversations about Till, history, and racial justice.”

Houck said: “The significance of the present photograph has a few levels: one, three Ole Miss students (four?) felt brazen enough to: perhaps shoot up the sign (we don’t know yet); pose for photographs next to it with guns drawn; post it prominently on social media; and leave it up for several months.”

“That this wasn’t offensive to them, and apparently their social media followers,” he said.

Kappa Alpha’s Ole Miss chapter said Friday in a statement to ABC News that “the making of the photo was unrelated to any event or activity of our chapter. The photo is inappropriate, insensitive, and unacceptable. It does not represent our chapter.”

University of Mississippi spokesman Rod Guajardo identified Ben LeClere and John Lowe in the photo, though the third suspect’s identity remains unclear, according to a report Friday from CNN.

Guajardo said in a statement that the image is “offensive and hurtful” and the university supports “the actions made by the Kappa Alpha Order leadership in suspending the students involved, and we are aware that this decision is backed by its National Administrative Offices.”

A fourth sign, which will be bulletproof, is expected to replace the vandalized one soon, CNN reported.