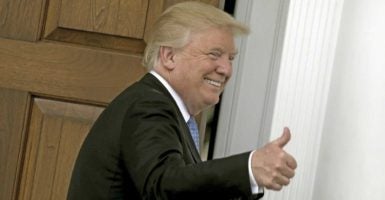 An election expert projects more than 800,000 noncitizens voted in the 2016 election and overwhelmingly for Democrat Hillary Clinton.

On Sunday, the president-elect tweeted he would have won the popular vote had it not been for illegal votes cast. The Trump transition team on Monday cited nonpartisan studies on noncitizens voting and of faulty voter registration across the country. Only citizens 18 or older can legally vote.

“Extrapolating on data from several years ago certainly doesn’t substantiate the claim that Trump is making now,” Jesse Richman, an associate professor of political science at Old Dominion University, told The Daily Signal. “That could change. If there is a recount in Michigan and Trump loses by a few votes, then it’s very plausible that noncitizen voting made a big difference. Hopefully, it doesn’t come to that.”

Richman applied those numbers to 2016:

The basic assumptions on which the extrapolation is based are that 6.4 percent of noncitizens voted, and that of the noncitizens who voted, 81.8 percent voted for Clinton and 17.5 percent voted for Trump. … 6.4 percent turnout among the roughly 20.3 million noncitizen adults in the U.S. would add only 834,318 votes to Clinton’s popular vote margin. This is little more than a third of the total margin. … Is it plausible that noncitizen votes added to Clinton’s margin? Yes. Is it plausible that noncitizen votes account for the entire nationwide popular vote margin held by Clinton? Not at all.

A December 2015 study led by Stephen Ansolabehere of Harvard University argued the 2014 Old Dominion study was flawed and that “the likely percent of noncitizen voters in recent U.S. elections is zero.” Richman responded to the criticism and said suggesting zero percent does not hold up.

Trump transition team spokesman Jason Miller cited the Old Dominion study reported on in The Washington Post in 2014, as well as a Pew Research Center study from 2012 about problems with voter registration across the country.

“An issue of concern is that so many have voted that are not legally supposed to,” Miller told reporters in a conference call Monday.

He said this warrants more attention than the “shiny object” Jill Stein and the Green Party are using to push recounts in Wisconsin, Michigan, and Pennsylvania that have no chance of overturning the election.

Beyond the noncitizens voting study from Old Dominion, Miller pointed to the Pew study from 2012 that found 24 million voter registration records in the United States, or about 1 in 8, were “significantly inaccurate or no longer valid.”

The Pew study further found “1.8 million deceased individuals are listed as voters,” that “12 million records contain an incorrect address,” and that “2.75 million people have registrations in more than one state.”

It would take a very high percentage of noncitizens voting to overcome the Clinton popular vote lead, said Steven Camarota, director of research for the Center for Immigration Studies, a think tank that favors strong enforcement of immigration laws.

Trump could be correct about the number of illegal votes, but there is no way to know, said Hans von Spakovsky, senior legal fellow with The Heritage Foundation who focuses on voter integrity issues.

“It’s possible he’s right, but we don’t know because there is no way to quantify, no system in place to identify noncitizens voting,” Spakovsky told The Daily Signal. “The Department of Justice and Department of Homeland Security should obtain state voter registration lists and check against noncitizen database. And the DOJ should start prosecuting noncitizens who are voting.”

Prosecuting voter fraud will have to be a higher priority under the Trump administration than under the Obama administration, said Tom Fitton, president of Judicial Watch, a conservative government watchdog.

“It has got to be a priority I would think based on Mr. Trump’s rhetoric,” Fitton told The Daily Signal. “At least, make sure that only citizens are registered to vote. We need basic reforms to reassure people that elections are free and fair.”