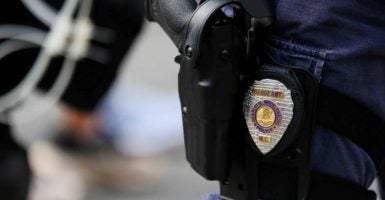 Denver County’s sheriff office has been slapped with a fine by the Department of Justice because it refused to hire noncitizens as deputies.

From the beginning of 2015 through last March, the Denver Sheriff Department went on a major hiring binge, adding more than 200 new deputies. But those jobs ended up only going to citizens, because the department made citizenship a stated requirement on the job application. The department admitted as much in a new settlement with the U.S. government, which requires it to pay a $10,000 fine.

The department will also have to comb through all of its job applications from the past two years, identifying immigrants who were excluded from the hiring process and giving them due consideration.

“Eliminating this unlawful citizenship requirement will help ensure that the Denver Sheriff Department hires the best and most qualified individuals to protect and serve,” DOJ Principal Deputy Assistant Attorney General Vanita Gupta said in a statement. “The entire community will benefit from these reforms.”

Under the Immigration and Nationality Act, employers are required to give equal treatment to noncitizens with valid work permits, unless state, local, or federal law explicitly requires certain jobs be open only to citizens.

More than 40 U.S. states currently have laws that in some capacity restrict noncitizens from being police, but Colorado is not one of them. The department says it was simply unaware that limiting employment to citizens was a violation of federal law.

In a report released last October, the Department of Justice blasted citizenship requirements for officers as a “barrier” to creating more racially diverse police forces.

This article was originally published by The Daily Caller News Foundation