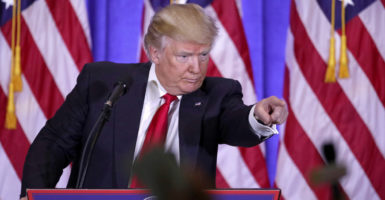 Just days into his presidency, Donald Trump is already experiencing an unprecedented level of one-sided media coverage, former House Speaker Newt Gingrich said. And don’t expect it to get any better, he warned.

Speaking Monday at The Heritage Foundation—the fourth of a six-part series on understanding Trump and Trumpism—Gingrich addressed the media’s negative coverage of Trump’s inaugural address.

According to Gingrich, the left’s dishonesty and hostility is something Trump should expect to deal with “every day for eight years.”

“It will never go away, it will never end, and it’s not an accident, it’s not confusion, it’s not misinformation,” he said. “These people are their mortal enemies.”

Gingrich cited a clear and purposeful misrepresentation of the president when Time journalist Zeke Miller mistakenly tweeted that a bust of Martin Luther King Jr. had been removed from the Oval Office on Saturday.

“It is so enraging to have the propaganda media put out something like the Martin Luther King Jr. story because it’s designed to sustain a specific attack, designed to create a brand that says you cannot be for Trump if you’re nonwhite because he is a racist,” Gingrich said.

While Trump’s inaugural address was categorized by several in the media as dark and militant, Gingrich suggested it was the most vivid statement of anti-discrimination of any other president in American history.

“These are pretty strong statements against discrimination, which had it been uttered by a liberal Republican or a liberal Democrat, it would have led to rhapsodic response from people like Chris Matthews, flowing with joy at the commitment to a colorblind America,” Gingrich added.

“Instead of covering this extraordinary commitment to anti-discrimination on the part of President Trump in his new inaugural,” Gingrich said, “you have a brief flurry over whether or not he has kicked out Martin Luther King Jr.”

Outraged by the media’s coverage of Trump’s first days in the White House, Gingrich addressed what the world looks like from middle America, not the coastal elites.

“Trump, at one point, talked about America and the pain we’re living through and people thought he’s using much too strong of language,” he said. “We had 4,000 people shot in Chicago last year. What words would our left-wing friends like to use to describe a city in which 4,000 Americans are shot in one year?”

“Trump, to his credit, is threatening both the left and the establishment simultaneously,” Gingrich said. “That is so different than anything we’ve seen in our lifetime.”

Trump’s success is a result of “the hostility of the left-wing fascists” funded by George Soros and the “propaganda media” to create a country that is unacceptable to the majority of Americans, Gingrich argued.

“Soros would like to impose Soros’ vision of a hard-left world,” Gingrich said. “The fact that the day after the inaugural, you go and look at their speeches, you go and look at what they said, there’s no middle ground here. Either Trump surrenders or Trump wins. There’s not going to be any zone of compromise.”

Gingrich will continue part five of his six-part series on Trumpism at Heritage on Wednesday. The speech will take place at 11 a.m. EST.