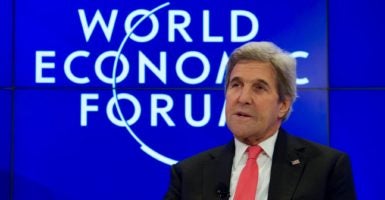 All the heroes carrying the fate of the world on their shoulders phoned in to NPR Friday morning. Former Secretary of State John Kerry, Canadian Minister of Environment and Climate Change Catherine McKenna, and business magnate Richard Branson, all nearly snarling, attempted to cultivate hatred and mistrust toward President Donald Trump following his decision to withdraw from the Paris Agreement.

Phony high-mindedness is also being deployed against Trump. French President Emmanuel Macron, for instance, went around America’s head of state and chief representative to flatter the American public, reassuring the American public that France and the world still “believes in you.”

That global elites feel sufficient self-confidence to attempt to publicly shame the president of the United States is partly because other U.S. presidents have typically succumbed to similar pressures long before they became public.

Yet few arguments against Trump reveal as much as a recent Washington Post headline: “Trump made up his mind on Paris. Now the rest of the world will do the same on him.” In other words, the U.S. president’s deliberations should be derived from fear of elite ire, speaking on behalf of a world majority.

Leveraging the alleged authority of the majority—not a national majority, but that of the world itself—Trump’s critics cite the fact that America, Nicaragua, and Syria are the only nations not subject to the Paris accord. The dogma that majorities are wise—half-believed, half-used as manipulation by advocates—is striking partly because of the elevation of nations like Iran and North Korea, suddenly viewed as committed environmentalists.

Using similar arguments, the Obama administration worked hard to obligate the American public, despite itself, to agreements that appeared to be treaties, but that have none of the legal or moral authority. The Iran agreement, for instance, proceeded in this way. From its example, one learned not only that such agreements are unenforceable, but that they contain a host of cash transfers, which would never stand the light of investigative inquiry if they were real treaties.

More importantly, obligating the entire nation for generations to come requires Senate ratification, for no small reason. That is because the public should consent to being obligated to going to war, like in case of violation of the Iran deal, or of transferring billions of dollars to other nations, while stifling domestic interests, like in the case of the Paris Agreement.

This Obama-era approach in practice means rule not by the U.S. Senate, but rule by elite international opinion, hiding behind a seeming majoritarian consensus. These opinion makers, feeling neither moral obligations to the well-being of any particular nation, nor under any check to carry out their promises, aim to replace the deliberative function of the Senate.

Trump is right to not cave to this breed of influence. If the agreement is suitable for the U.S., the Senate must debate the matter and gain the public’s consent. Without this, public trust and republican honor are undermined, and our constitutional institutions are replaced with rule by international pressure.