Lemons in America Are About to Get Cheaper 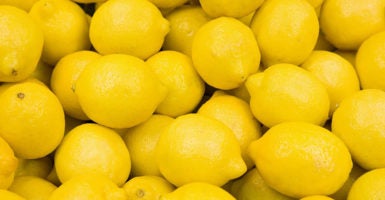 Lemon prices in the U.S. are expected to drop by 2 percent in light of the Department of Agriculture's decision to lift a ban on Argentine lemon imports. (Photo: iStock Photos)

Thanks to the U.S. Department of Agriculture, Americans will be making a whole lot more lemonade this year, and saving money while they’re at it.

On Dec. 23, the Department of Agriculture eliminated a 15-year-old ban on lemon imports from northwest Argentina, the world’s top producer of lemons.

Domestic producers had long argued that Argentine lemons carried pests and diseases that would harm U.S. consumers, but a decade of testing that claim by the Department of Agriculture has now proved otherwise.

While guidelines still remain in place to ensure that lemons imported from Argentina are not harmful to consumers, the lifting of the ban is predicted to lower the price of lemons in the U.S. by about 2 percent.

Currently, the value of U.S. lemon imports is greater during the summer months than the winter.

For example, last year, lemon imports in July were valued at approximately $2.5 million, exceeding January imports by more than $1.7 million. This is because the primary harvest season for domestic lemon producers is winter, creating a demand for lemons from foreign producers who harvest during the offseason.

Similar to other countries that export lemons to the United States, Argentina’s harvest season is in the summer—counter to that of the U.S. The Department of Agriculture estimates that “imports from Argentina would help meet the demand for fresh lemons especially during the summer when demand peaks.”

Lemons from Argentina are expected to compete with and potentially replace some current U.S. imports, but the rule change is not expected to have a significant economic impact on small businesses domestically.

Trade freedom in the U.S. is held back by high tariffs and non-tariff barriers for some products, despite an average tariff rate of only 1.5 percent, according to the Index of Economic Freedom.

Bryan Riley, senior policy analyst at The Heritage Foundation, states that “the simplest way to achieve trade freedom is to unilaterally reduce tariff and non-tariff barriers.”

The Department of Agriculture has done just that by unilaterally changing this rule and allowing Argentine lemons to be imported into the United States, increasing American’s freedom to turn lemons into lemonade.