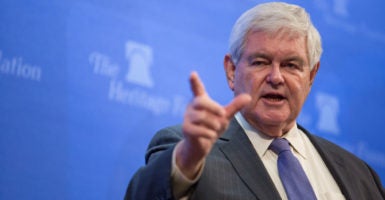 Former House Speaker Newt Gingrich has begun a six-part series of talks on Trumpism at The Heritage Foundation in January. (Photo: Willis Bretz for The Daily Signal)

Speaking Tuesday at The Heritage Foundation at the first of a six-part series on Trumpism, Gingrich explained how the media’s disdain for the American people ultimately led to Trump’s victory in November.

“Because the media had such contempt for the average American, they simply could not see what was happening,” Gingrich said.

Following his Heritage speech, Gingrich spoke to The Daily Signal about the divide that exists between the American people and the news media.

“There’s a huge gap between the world as reported by the news media and the world as it really exists,” Gingrich said.

Gingrich pointed to Hollywood’s display of hatred toward Trump at the Golden Globes as an example of the gap between Americans and Hollywood elites.

According to Gingrich, Trump disrupts the left’s core identity of safe spaces, political correctness, and their vision of the appropriate behavior.

“It just was inconceivable to members of the establishment that someone this randomly noisy, running a campaign that was so radically different, articulating issues that were clearly politically taboo, and at times engaging in behavior and language that was unthinkable to the establishment definition of appropriate leadership, that such a person could become president of the United States until it became a fact,” he said.

Gingrich said the biggest disconnect came from the media’s failure to cover the issues that resonated most with Americans, while instead scrutinizing the way in which Trump delivered his message.

“The media kept saying this guy is noisy, he uses inappropriate language, he’s not clear, and the average person would go ‘yeah, but I get what he’s talking about,’” he said.

Gingrich will return to Heritage on Thursday for part two of the Trumpism series. The speech takes place at 11 a.m. EST.