Despite Controversies, Holder Had Easier Road to Confirmation Than Sessions 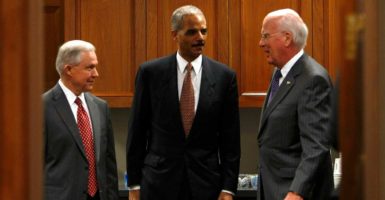 President Barack Obama’s first attorney general pick skated through Senate confirmation hearings, but top Democrats have indicated that President-elect Donald Trump’s selection may have a tougher time getting through.

Jeff Sessions is “wonderful to work with,” @SenatorLeahy said.

“Now that he is nominated to be attorney general, we will see if the same person is still too extreme for Republicans,” Leahy said in a Boston Globe op-ed Sunday, later adding, “Sen. Sessions has repeatedly stood in the way of efforts to promote and protect Americans’ civil rights.”

It’s a departure from what Leahy said of Sessions in 2009, when both men voted to confirm Obama’s controversial nominee, Eric Holder, to be attorney general.

“Sen. Sessions is also a former U.S. attorney and knows what one goes through in that regard, and we’ve relied on him for that experience,” Leahy said to his colleague during the Holder confirmation hearing in January 2009, according to the Washington Examiner.

In June 2010, Leahy called Sessions “wonderful to work with,” the Examiner reported.

The Sessions confirmation hearing could shape up differently from the Holder hearing of eight years earlier. Despite a controversial legal career in the public and private sector, Holder had a smooth ride to office, gaining the support of most Republicans.

By contrast, the confirmation process for Sessions has been rocky even before the first day of hearings.

Much Democratic opposition to Sessions is based on his conservative record in the Senate. However, it also extends to comments or jokes regarding race Sessions allegedly made while serving as a U.S. attorney in the Southern District of Alabama in the early 1980s, even as he was known for helping to prosecute multiple civil rights cases. These were the allegations that sunk his 1986 nomination to be a federal judge.

Two former Justice Department lawyers, one who continues to be a Sessions critic today, recanted a 1986 allegation used to stop the judicial nomination.

Senate Minority Leader Charles Schumer, D-N.Y., said that Sessions is one of the eight nominees that Democrats will seek to delay confirmation votes on into March. The Senate confirmed Holder in early February 2009.

In all likelihood, the Senate will confirm Sessions as attorney general given the Republican Senate majority. He’s also known for having strong relationships with Senate Democratic colleagues, and will get at least some crossover support. But it appears he is not as likely as Holder to gain overwhelmingly bipartisan support.

After his election, Obama announced he would nominate Holder to run the Justice Department. Holder was a former deputy attorney general in the Clinton administration under Attorney General Janet Reno. Republicans and conservative groups highlighted Holder’s record in the No. 2 spot.

Holder played a role in President Bill Clinton’s pardon of fugitive financier Marc Rich, which the outgoing president granted on his final day in office. Before becoming a Democrat later that year, ranking Republican on the Senate Judiciary Committee Arlen Specter of Pennsylvania raised issues about Holder’s role in the controversial 1993 federal siege of the Branch Davidian compound in Waco, Texas.

While at the firm, Holder wrote a brief in favor of the District of Columbia, arguing that granting the individual right to bear arms, “opens the door to more people having more access to guns, and putting guns on the streets.”

Ultimately, the U.S. Supreme Court held in the 2008 case of District of Columbia v. Heller that the Constitution guarantees the individual right to own a firearm.

Leahy, chairman of the Senate Judiciary Committee in 2009, asserted the Holder nomination should move quickly. Leahy said on Jan. 15, 2009:

I would hope that we would have a prompt confirmation so he can restore morale and purpose throughout the Justice Department, it is important that the Justice Department have its senior leadership in place without delay. The attorney general is the top law enforcement officer in the country; he is a key member of the national security team.

The Senate largely heeded Leahy’s advice. The Judiciary Committee voted 17-2 on Jan. 28 to confirm Holder. Only Republicans Sen. John Cornyn of Texas and then-Sen. Tom Coburn of Oklahoma voted “no.” The full Senate confirmed Holder with a bipartisan 75-21 on Feb. 2, with Sessions and Specter voting for him both times.