How States Could Restrict Use of Food Stamps in Trump Era 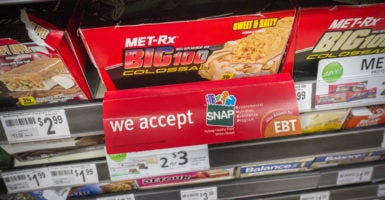 In Maine and Arkansas, officials plan to ask the Trump administration to approve a waiver that would allow them to prohibit the purchase of junk food, candy, and soda with food stamps. (Photo: Richard B. Levine/Newscom)

Officials in at least two states are preparing to ask the new Trump administration for approval to prohibit use of food stamps to buy junk food and candy—a restriction the Obama administration has opposed.

But heading into 2017, states such as Maine and Arkansas are looking to go further.

The Maine Department of Health and Human Services plans to submit a waiver request to the U.S. Department of Agriculture as soon as Donald Trump is sworn in as president Jan. 20. If approved, it would allow the state to prohibit food stamp recipients from using their benefits to buy sugary items such as candy and soda.

“We want to have it on their desks as soon as possible,” Mary Mayhew, commissioner of Maine’s  Department of Health and Human Services, told The Daily Signal, adding:

What an individual with their own money that they earned chooses to buy is their prerogative. What a program known as Supplemental Nutrition Assistance—that is taxpayer funded—supports should be restricted and directed based upon the policy intent of the program.

In Arkansas, state Rep. Mary Bentley, R-Perryville, has filed a bill in the state House of Representatives to restrict the use of food stamps to “food products and beverages that have sufficient nutritional value.”

Maine’s health and human services agency submitted a waiver request to the federal government last year that would have allowed it to ban the purchase of junk food with food stamps.

But the Agriculture Department ultimately denied Maine’s request. The federal government has yet to approve a waiver for any state looking to further restrict food stamp purchases.

Still, the rejection hasn’t deterred Mayhew, who hopes that the Trump administration will be more willing to accept changes to the food stamp program.

“I hope that this will be met with more common sense than it has in the past that a program known as Supplemental Nutrition Assistance will put the emphasis back on nutrition in the development of policies and will support an effort by Maine to ban soda and candy to be able to be purchased with food stamps,” Mayhew said.

In Arkansas, Bentley’s bill doesn’t specify which foods and beverages would be prohibited—the state Department of Human Services is tasked with compiling a list—but she told the Northwest Arkansas Democrat-Gazette that chips, soda, and candy would be among the items banned.

The bill also instructs the Arkansas Department of Human Services to pursue a waiver from the federal government.

In an interview with Arkansas’ KFSM-TV, Bentley said:

We have a large amount of food stamps in our state, but yet we have the highest rate of senior hunger and hunger for kids. So obviously, the food isn’t headed in the right direction. I want it to be used for food at the table, and to feed kids.

Officials in both Maine and Arkansas said junk food bans would curb each state’s obesity rates, hold down Medicaid costs, and help ensure food stamp recipients use the food stamp program as intended.

Maine’s Medicaid program spent more than $1.5 million from October 2014 to October 2015 on medical claims related to obesity, according to the state Department of Health and Human Services.

In Arkansas, Medicaid and Medicare finance nearly 40 percent of the state’s $1.25 billion in obesity-related medical costs, according to a 2015 report issued by the Winthrop Rockefeller Institute.

“Everyone understands that soda and candy have no nutritional value and therefore don’t have any place in the Supplemental Nutrition Assistance Program,” Mayhew said.

But none has been successful so far.

Josh Archambault, a senior fellow at the Foundation for Government Accountability, said that under the Obama administration, the “general operating principle” has been to deny attempts by states to lessen the number of participants in the food stamp program, known as SNAP.

Since President Barack Obama took office in January 2009, the number of those receiving SNAP benefits increased from 32 million to nearly 45 million by January 2016, according to the Agriculture Department.

“Waivers have revolved around ‘How do we make it as easy as possible to get people on the program?’” Archambault told The Daily Signal, describing the Obama administration’s approach.

“When states like Maine were seeking commonsense reform or the authority to manage the program in keeping with its focus and with a commonsense approach, those efforts were continually thwarted by the federal government,” she said. “There have been constant roadblocks thrown up by this administration.”

But following the Nov. 8 elections, which saw Republicans maintain control of the U.S. House and Senate as well as retake the White House, there could be movement on the federal level.

Some on Capitol Hill talk about moving a welfare reform bill in 2017 or 2018, Archambault said, which could set up a “robust discussion” surrounding the rules for various welfare programs, including food stamps.

“Some of these early requests for waivers could set the stage for a bigger discussion in Congress in terms of changing the rules and funding the programs,” he said, “and that would change the playing field.”

Though it’s possible states could see changes to the food stamp program in the Trump administration, questions remain.

“It’s a brave new world here with a new administration coming in, but with that does come some question marks,” Archambault said. “There’s pent-up demand at the state level to request flexibility, and we’ll have to wait and see.”