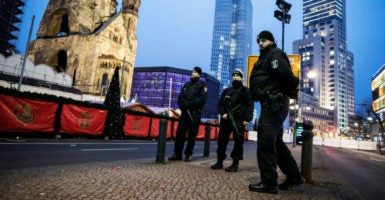 An attacker drove a truck into a Christmas market in Berlin, Germany, on Monday, killing 12 and wounding at least 50. (Photo: Hermann Bredehorst /Polaris/Newscom)

Before this year, Germany was not used to Islamist terrorists striking on its home soil. A lot has changed since.

The terror threat that haunts Germany seemingly culminated—at least for 2016—in the outrage that occurred in Berlin this week. At present, 12 are dead and dozens more were injured in a truck attack that mirrored the one that took place in Nice, France, this past summer.

It comes as no surprise that the Islamic State, also known as ISIS, has claimed credit for the attack in Berlin, although the actual perpetrator is yet to be arrested.

Intelligence services clearly had an idea that something like this was possibly coming. A State Department travel alert from November warned of a “heightened risk of terrorist attacks throughout Europe, particularly during the holiday season.”

The travel alert went on to say, “U.S. citizens should exercise caution at holiday festivals, events, and outdoor markets.” It stated that “credible information” indicated that ISIS or al-Qaeda could be likely perpetrators of an attack.

Such target-rich environments appeal to terrorist groups aiming to cause death and carnage during the holiday season. Even before the plot targeting Berlin, a 12-year-old boy radicalized by an ISIS operative tried to blow up a Christmas market in Ludwigshafen on Nov. 26. Fortunately, his bomb failed to detonate.

On the same day, arrests were made in Strasbourg and Marseille, which disrupted an ISIS plot targeting a Christmas market in Champs-Elysees, Paris.

Yet the threat does not begin and end with ISIS. Those trained by al-Qaeda have also planned to attack a Christmas market in Strasbourg. That plot was disrupted in December 2000 and four Algerians were subsequently jailed for between 10 and 12 years.

Al-Qaeda has also launched terrorist attacks on aviation during the holiday season—in 2001, via shoe bomber Richard Reid, and in 2009, via underwear bomber Umar Farouk Abdulmutallab.

With the Berlin assailant still on the loose (at the time of this writing), German authorities will be working with counterterrorism partners domestically and internationally to try and stop another attack from taking place. In the short-term, this involves finding whoever was responsible, what networks they were connected to, and any ties to foreign terrorist groups.

It may be that there were ties to terrorists based in Germany. For example, it is worth remembering that “Charfeddine T”—a 24-year-old Tunisian—was arrested just days ago on the suspicion that an attack was being planned in Berlin. Whether there are any ties is unknown, although the timing is worth noting.

Presumably, whoever carried out the attack will be caught relatively quickly. Even so, there is much to reflect on for Chancellor Angela Merkel and for German society generally.

This is the fourth terrorist attack that has taken place there this year, and there have been a host of other attempted attacks thwarted. Several of these plots have been planned by refugees recently settled into the country.

Clearly the vast majority of the 1 million-plus refugees to have entered Germany are not terrorists. Yet the numbers that Germany took in were so large that even a small minority has led to a very big issue.

So, the problem is clear. Whether the German political class has adequate solutions, much less so.