Transgender Graduates Get $20,000 Each After Restroom Dispute 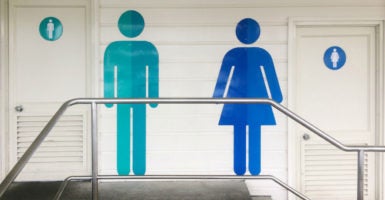 Three students sued their school in October 2016 when it wouldn’t allow them to use the restroom corresponding with their gender identity rather than their birth gender. (Photo: Rafael Ben-Ari/Chameleons Eye/Newscom)

A Pennsylvania school agreed to pay three transgender students $20,000 each in a settlement allowing the students to use the restroom corresponding to their gender identity.

The details of the costly settlement—totaling $60,000 awarded to the students and $75,000 to their attorney—were released Tuesday after the Pittsburgh Post-Gazette requested the information from the Pine-Richland School District under the state’s sunshine law, according to U.S. News & World Report.

The students—two of whom identify as female but were born male, and one who identifies as male but was born female—sued Pine-Richland High School in October 2016. Each complained that the school wouldn’t allow them to use the restroom corresponding with gender identity rather than birth gender.

The high school initially enforced its bathroom policies in response to complaints from parents who said that allowing transgender students to use the restroom of their choice violated the privacy of the other students.

By agreeing to settle, the high school now allows students to use whichever bathroom “consistently and uniformly [matches their] asserted gender identity.”