A Labor Secretary Who Knows How to Create Jobs 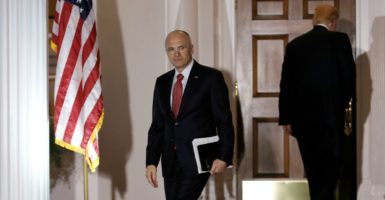 As CEO of Carl's Jr., Andy Puzder grew the burger chain into a major U.S. employer with thousands of workers. (Photo: Mike Segar/Reuters/Newscom)

President-elect Donald Trump has selected Andy Puzder, CEO of Carl’s Jr., the successful fast-food hamburger restaurant chain, as his secretary of labor. This has set off a bit of protest by the hard left and the union bosses.

How could Trump select someone who actually knows something about hiring workers and creating jobs? How dare he!

Puzder has grown Carl’s Jr. and Hardee’s into a major U.S. employer with thousands of workers. He helped save the company and the employees. Big labor should be happy, right?

Hardly. Puzder has made a name for himself as a critic of Obamacare, many of the Department of Labor’s most mindless employment regulations, and a federal minimum wage hike.

Puzder will hopefully bring a swift and welcome change to the culture of this agency. In the past, the Labor Department has been a rubber stamp for the union bosses’ agenda. As an employer, Puzder knows what works and doesn’t work in the real marketplace for labor.

That’s exactly why the left is mounting a loud and vicious campaign against him. Groups like the George Soros-funded Media Matters and the big unions are lambasting Puzder as someone who wants to “replace workers with robots” and who is leading the charge to keep wages low by opposing the “fight for $15” minimum wage hike.

But these are spurious charges. On minimum wage, Puzder speaks common sense: He says he would support “minimum wage increases that are rational and do not destroy jobs or the businesses supporting them.” He is also of similar thinking to Trump: Leave the decision to the states.

The Congressional Budget Office estimates that even a $10.10 minimum wage would kill 500,000 jobs, so a $15 minimum could bring job losses in the millions. That’s not pro-worker.

Similarly, the left has distorted Puzder’s views on automation and robotics. Puzder believes that mandated benefits like the minimum wage hikes are merely accelerating the move to automation in the restaurant industry. That is simply a well-substantiated fact. He has said many times that there are no robots that could replace the workers at Carl’s Jr.

Puzder has his finger on the pulse of the labor market. He predicted with great foresight that the Obamacare law would reduce hiring for businesses that near 50 workers—the employment threshold for the Obamacare regulations—and that the design of the Obamacare insurance would soon lead to a death spiral of rising costs in the market. He was right on both countsand for that too, the unions are out to bury him.

Does being right disqualify one from serving in the Cabinet? Trump wisely with this pick says no. Trump has also sent a message that he won’t knuckle under to the bullying tactics and the intimidation game that the left has engaged in for so many years.

Here’s a statistic for Puzder to keep in mind: Where union presence is strongest in America—places like Detroit and Newark—jobs are disappearing fast. Where states have right-to-work laws and not forced union rules, job creation is twice as swift.

If job creation is Trump’s top priority, he’s made a fabulous choice to run the Labor Department.