Obama Political Appointees to Continue as Career Employees Under Trump 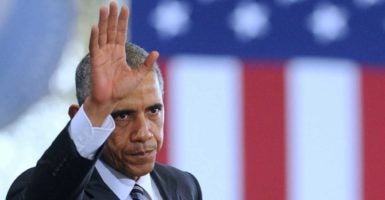 President Barack Obama waves to a Tampa crowd where he spoke on Dec. 6 about national security. (Photo: Paul Hennessy/Polaris/Newscom)

After President Barack Obama exits office, at least 88 of his political appointees will likely remain working in the federal government under a Donald Trump administration, according to numbers from the Office of Personnel Management.

From Jan. 1, 2010, through Sept. 30, 2016, federal agencies selected 112 political appointees for career civil service jobs. Of those, the Office of Personnel Management approved 88 and rejected 24.

Unlike political appointees, federal workers in the civil service system are hired through a merit system, are difficult to fire, and carry over during administration changes, Republican or Democrat.

Political appointees are allowed to transition to career federal jobs, but under the law, they are supposed to go through the same merit-based selection process as other applicants.

“Selecting civil servants based on ideology instead of qualifications results in a less effective, more politicized bureaucracy,” Henry Kerner, assistant vice president of Cause of Action Institute, said in an email to The Daily Signal Tuesday. “Burrowing also provides the outgoing presidential administration the ability to reward its allies by stacking agencies with politically-aligned people who will be less inclined to help implement the new administration’s priorities.”

“Selecting civil servants based on ideology instead of qualifications results in a less effective, more politicized bureaucracy,” @CauseofActionDC says.

After an agency has hired a political appointment to a career position, the conversion has to face final approval by the Office of Personnel Management.

“Federal guidelines require agencies to seek approval from [the Office of Personnel Management] for such moves, but it’s unclear how often these rules are followed,” Kerner added.

Office of Personnel Management spokeswoman Laura Goulding said the number could be higher.

“It’s difficult to provide an accurate number of Obama administration employees who may be in the process of converting, since it changes by the day,” Goulding told The Daily Signal.

She added, “We don’t know how many political appointees apply for permanent federal positions; we just see the number of selectees. [The Office of Personnel Management] has checks and balances in place to ensure cases requiring pre-appointment review are submitted to OPM for approval.”

An Obama administration political employee, who converted earlier this year to a civil service job in the Department of Veterans Affairs, could be playing a role in the presidential transition.

This could at least violate the spirit of the policy on presidential transitions, which is supposed to minimize partisanship, according to the Cause of Action Institute, a conservative government watchdog group.

The organization is more broadly investigating how many political appointees are moving into career civil service positions, a practice known as “burrowing.” The watchdog has made a Freedom of Information Act request to both the Office of Personnel Management and the VA.

Obama appointed Gina Farrisee in September 2013 to serve in the political job of VA assistant human resources secretary. In May, she converted to the career civil service position of deputy chief of staff—a role she will continue in after Trump takes office.

Before serving in the VA, Farrisee was an Army veteran and was awarded several military decorations. She served as the commanding general of the U.S. human resources command at Fort Knox, Kentucky.

“According to information obtained by [Cause of Action] Institute, Gina Farrisee, the deputy chief of staff at VA, is apparently a key member of the VA White House transition team that is preparing the agency for the next administration,” wrote Lamar Echols, counsel for Cause of Action, in a FOIA request to the VA. “If true, this arrangement creates the appearance that the transition process will be managed by Obama administration political appointees because Ms. Farrisee was an Obama administration appointee until May 2016.”

That could be a problem because each federal agency is supposed to have two transition leaders, one from the political level and another from the career level.

“In this case, it appears a former political appointee will be playing the role of a nonpartisan career employee, an apparent conflict of interest,” Echols wrote.

Echols’ letter said this could also go against a May executive order by Obama, which said:

The peaceful transition of power has long been a hallmark of American democracy. It is the policy of the United States to undertake all reasonable efforts to ensure that presidential transitions are well-coordinated and effective, without regard to party affiliation.

The VA did not respond to phone and email inquiries from The Daily Signal as of post time to confirm whether Farrisee is part of the transition team.

Goulding, with the Office of Personnel Management, said, “We can’t confirm any specific members of transition teams; we don’t have that information.”

The report covered 30 federal agencies from Jan. 1, 2010, through Oct. 1, 2015. According to the report, agencies failed to get final Office of Personnel Management approval when hiring political appointees to career jobs.

“In those instances where the agency did not submit a request for pre-appointment review, [the Office of Personnel Management] informs the agencies in writing of the requirement to conduct a review of the selection post-appointment,” Goulding said, adding:

OPM also works with agencies to increase awareness and understanding of OPM policy in this area. In addition, we are required by law to report to Congress when those individuals who underwent a pre-appointment review were appointed to the career position.