Gen. John Kelly Is a Good Pick for a Struggling Department of Homeland Security 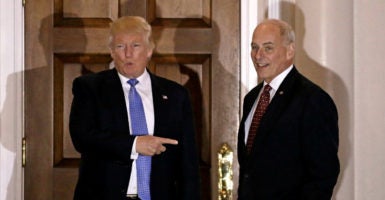 Reports emerged Wednesday that President-elect Donald Trump will nominate retired Marine Gen. John Kelly for secretary of the Department of Homeland Security. Kelly has both the personal character and years of experience that could make him the right choice for the job.

Much like retired Gen. James Mattis, who has been picked by Trump for secretary of defense, Kelly is a scholar-warrior. Those who have had the chance to meet the retired general have noted that he is a man of impeccable character with an uncanny ability to speak truth to power.

Kelly has more than 40 years of military service under his belt. He led one of nine U.S. combatant commands—U.S. Southern Command—where he developed foreign partnerships throughout Latin America as part of his strategy.

Kelly’s experience at U.S. Southern Command deepened his understanding of the serious threats posed to the homeland by transnational crime organizations.

Kelly was also exposed to the complexities of the Defense Department as the senior military aide to Secretary Leon Panetta.

All those who have served or worked with Kelly speak of his keen ability to cut through red tape and build effective teams as a leader. He gained a reputation for being a practical problem-solver in that role—a function he can hopefully bring to the Department of Homeland Security.

Kelly would lead the nation’s third-largest Cabinet department, which is responsible for immigration, vetting, counterterrorism, cybersecurity, disaster response, intelligence, law enforcement, and other matters important to securing the homeland.

The DHS is in desperate need of reform and leadership. It is consistently rated as the worst place to work in the federal government, and it is frequently overcome by an ever-evolving set of threats.

Kelly is an apt choice to take on, and hopefully solve the numerous challenges that the DHS faces, and will confront in the years to come.