Boehner: House ‘Has Done Its Job,’ Homeland Security Funding Up to Senate Democrats 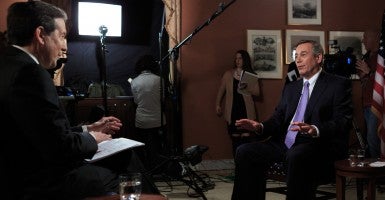 House Speaker John Boehner said today that if funding for the Department of Homeland Security expires on Feb. 27, then the responsibility lies with Senate Democrats.

During an appearance on “Fox News Sunday,” Boehner, R-Ohio, said he is “certainly” prepared to allow the agency to shut down because Senate Democrats “would be to blame.”

“The House has done their job under the Constitution,”  said Boehner. “It’s time for the Senate to do their job.”

Boehner defended combining the efforts to fund Homeland Security and to stop the president’s “overreach,” saying that “the House acted” because “Congress just can’t sit by and let the president defy the Constitution and defy his own oath of office.”

“The House has acted to fund the department, and to stop the president’s overreach when it comes to immigration and his executive orders,” said Boehner.

Boehner said Senate Democrats are “blocking the ability to even debate the bill.”

“I think it’s clearly stuck in the Senate, we can’t get on it, we can’t offer amendments to it,” said McConnell. “And the next step is obviously up to the House.”

Boehner said McConnell is “doing a great job as the new majority leader,” but insists that “the House has done its job” and acted to fund Homeland Security. The next move, he said, is up to the Senate.

“Senate Democrats are the ones standing in the way, they’re the ones jeopardizing funding,” said Boehner. “Why don’t they get on the bill and offer an amendment, offer their ideas, let’s see what the Senate can do.”

With only four legislative days left until the Republican Homeland Security Shutdown, Speaker Boehner made it clear that he has no plan to avoid a government shutdown that would threaten the safety of the American people. With every House Democrat now cosponsoring clean legislation to fund DHS, it is clear that the votes are present to pass a bill now if only Speaker Boehner would get out of the way.

George Will on Fox: "Will the Republicans be blamed [on DHS]? A) yes, they’re always blamed, and B) in this case they deserve to be blamed"

Dan Holler, communications director at Heritage Action for America, the sister organization of The Heritage Foundation, questioned the priorities of Senate Democrats on blocking the House legislation.

Boehner reiterated his position that Senate Democrats must make the decision to fund DHS on Twitter:

House has acted to #FundDHS. Up to Senate Dems now. Latest comments on this, from @FoxNewsSunday interview: http://t.co/9J489e4HPa

Here is how some lawmakers reacted to Boehner’s statement:

On #POTUS #immigration actions: “…executive orders aren't the way to do it.” –Sen. McCaskill 11/20/14 #FundDHS pic.twitter.com/TNBxJuI4Co

With only 12 days left, let’s hope Senate Democrats do the right thing and allow H.R. 240 to come up for a vote. pic.twitter.com/srULhiKDaD