Grave Digging in Iceland, Tofu in Convenience Stores: Your Tax Dollars at Work 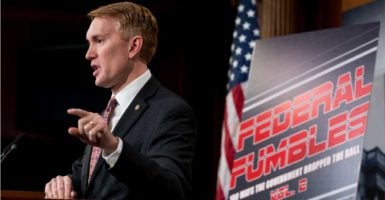 The national debt is expected to hit $20 trillion early next year. Sen. James Lankford has a few ideas to start chipping away at it.

Lankford’s new report, “Federal Fumbles: 100 Ways the Federal Government Dropped the Ball,” identifies $250 billion in wasteful spending. His goal is to help Congress determine funding and programs that can be streamlined.

Lankford acknowledged that his report is not comprehensive, but is meant to offer common ground solutions to wasteful government spending that would appeal to lawmakers of all partisan stripes.

“This is not about targeting Republicans, Democrats, any administration,” Lankford said. “Bureaucracy is bureaucracy, and inefficiency is present in every government. This is an issue of oversight.”

In order to significantly decrease the national debt and cut government spending, Lankford said both Congress and the Trump administration must be more engaged in oversight.

“With $19.5 trillion in debt, this is something that cannot be ignored,” Lankford said. “If we don’t get economic activity and we do not control our spending, this does not get better in the days ahead. It gets worse.”

Here are just six examples Lankford shared that are included in his report.