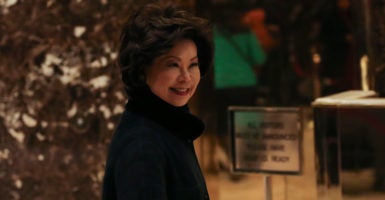 “Secretary Chao’s extensive record of strong leadership and her expertise are invaluable assets in our mission to rebuild our infrastructure in a fiscally responsible manner,” Trump said in a statement. “She has an amazing life story and has helped countless Americans in her public service career.”

In the new Trump administration, Chao stands to serve an influential role, as the president-elect made investing in infrastructure and reducing or eliminating “burdensome regulations” a key component in his campaign.

“The President-elect has outlined a clear vision to transform our country’s infrastructure, accelerate economic growth and productivity, and create good paying jobs across the country,” said Chao in a statement. “I am honored to be nominated by the President-elect to serve my beloved country as Transportation Secretary.”

If the Senate confirms Chao, she will succeed Anthony Foxx, who is the second official to serve in the position under President Barack Obama.

Here are six things to know about Trump’s pick for transportation secretary.

1) She comes from a humble background.

In 1961, at just 8 years old, Chao arrived in the United States on a freight ship from Taiwan. Her family was fleeing the communist revolution on mainland China. At the time, she spoke no English.

According to her biography, the experience of transitioning to a new country “motivated her to dedicate most of her professional life to ensuring that all people have the opportunity to build better lives.”

Chao graduated from Mount Holyoke College in Massachusetts before receiving her MBA from the Harvard Business School.

2) She was the first Asian-American woman to be appointed to a president’s Cabinet.

Chao served as secretary of labor under George W. Bush from 2001 to 2009. In this position, she was “the longest tenured secretary of labor since World War II, and the only member of President Bush’s original Cabinet to have served the entire eight years of his administration.”

Before serving under George W. Bush, his father, President George H.W. Bush, tapped Chao to run the Peace Corps. A year later, she headed the nonprofit United Way of America, which faced controversy after its former president was accused of abusing charity funds.

According to The New York Times, she became so popular among Chinese-American families for holding these posts that they would “wait to meet her in airports.”

3) She’s worked with a variety of D.C.-based think tanks.

In June, Chao became a distinguished fellow at the Hudson Institute, researching areas of “employment, labor mobility, international trade, and U.S. competitiveness in a worldwide economy.”

Prior to joining Hudson, she served as a distinguished fellow at The Heritage Foundation, which is the parent organization of The Daily Signal, for two stints from 1996-2000 and 2009-2016. At Heritage, she focused on jobs and the economy, trade, and competitiveness issues. 4) She’s been an influential force behind her husband, Senate Majority Leader Mitch McConnell.

Although Chao has never herself run for elected office, she has put in her fair share of campaigning for her husband, Sen. Mitch McConnell, the GOP leader from Kentucky.

During his 2014 re-election bid against the well-funded Alison Lundergan Grimes, “Chao headlined 50 of her own events and attended hundreds more with and on behalf of McConnell,” according to Time.

Her husband isn’t afraid to admit her influence: “The biggest asset I have by far is the only Kentucky woman who served in a president’s Cabinet, my wife, Elaine Chao,” McConnell said at the annual Fancy Farm GOP political picnic in August, according to Time.

5) She backed Donald Trump for president.

6) She’s the second person to head the departments of Transportation and Labor, and be married to the Senate majority leader.

From Alex Burns of The New York Times:

Elaine Chao will, amazingly, be the SECOND person to have been Sec of Labor, Sec of Transportation and married to Senate majority leader

This article was updated to include statements from Trump and Chao.