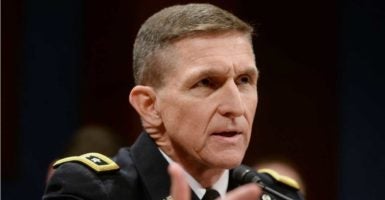 Michael Flynn, a retired U.S. Army lieutenant general, has been picked to fill the role of assistant to the president for national security affairs. (Photo: Michael Reynolds/EPA /Newscom)

My transition team, which is working long hours and doing a fantastic job, will be seeing many great candidates today. #MAGA

“I am pleased that Lt. Gen. Michael Flynn will be by my side as we work to defeat radical Islamic terrorism, navigate geopolitical challenges, and keep Americans safe at home and abroad,” Trump said in a statement Friday. “Gen. Flynn is one of the country’s foremost experts on military and intelligence matters and he will be an invaluable asset to me and my administration.”

“@GenFlynn will be by my side as we work to defeat radical Islamic terrorism.”
—@realDonaldTrump

Flynn, a registered Democrat, has had a career of more than 35 years in service to the United States. He served several tours in Iraq and Afghanistan, for a total of almost five years in combat, and was a senior military intelligence officer in the Department of Defense.

“I am deeply humbled and honored to accept the position as national security adviser to serve both our country and our nation’s next president, Donald J. Trump,” Flynn said in a statement on Friday.

He is said to have been successful at hunting down terrorists, knows the intelligence community very well, and is a cyber expert.

“[Flynn] served as the director of intelligence for the Joint Chiefs of Staff; the U.S. Central Command, which oversees operations in the Middle East; the NATO mission in Afghanistan; and the Joint Special Operations Command,” Politico previously reported.

Flynn has testified before Congress on national security issues and has publicly criticized the Obama administration’s foreign policy in the Middle East.

“The people in the United States have lost respect and confidence in their government to be able to solve the problems that we face now and in the future,” Flynn told Foreign Policy in 2015.

Flynn served as Trump’s top national security adviser during the campaign, advising Trump on the Islamic State, Iran, and the military, according to reports. Flynn was reported to have been in consideration for the role of vice president.

Flynn will “continue providing expert advice and support to the president-elect” in his advisory role, a press release from the Presidential Transition Team says.

“During the transition, Gen. Flynn has been present when Mr. Trump has received his daily intelligence briefing,” The New York Times reported.

Flynn co-authored the recent New York Times bestseller “The Field of Fight: How We Can Win the Global War Against Radical Islam and Its Allies.”

Thank you for the terrific endorsement of @FieldofFight by @realDonaldTrump who will B our next POTUS! @MGF_83 https://t.co/JKXSi7CAiq

Since retiring from his military career, he founded the Flynn Intel Group, a commercial, government, and international consulting firm.

He has three masters degrees, an MBA in telecommunications; a MMAS in the military arts and sciences; and a masters in national security studies.