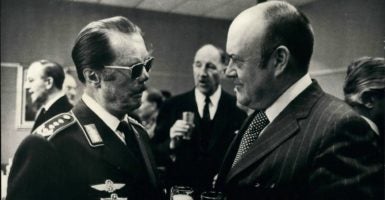 On the right, Secretary of Defense Melvin Laird, at a NATO meeting in 1971 in Belgium. (Photo: Keystone Pictures USA/ZUMAPRESS/Newscom)

Before his election to the Wisconsin state Senate in 1946, Laird served in World War II as an ensign aboard the USS Maddox, where he was injured in a kamikaze attack and awarded the Purple Heart.

From 1953 to 1969, he served as the representative for Wisconsin’s 7th Congressional District, during which time he established a reputation for himself in defense circles. Even as a career politician, he was seen as a patriot before a partisan.

When Laird was tapped to serve as the secretary of defense for the Nixon administration, the U.S. force commitment in Vietnam was nearing its peak. Support for the war was weak and falling, defense budgets were low, and inflation had ballooned to 7.2 percent.

Concerned by the widening rift in public trust and the mounting threat from Soviet strategic and conventional forces, Laird pushed for a withdrawal from Vietnam, an end to the military conscription process, and a brake on further budget cuts.

Although he believed the best outcome for Vietnam would come through diplomatic means, he was a staunch advocate of a strong national defense.

Like many of America’s greatest leaders, Laird was an advocate of peace through strength. He defended the need for a strong nuclear arsenal and argued there was “no substitute for military superiority” to prevent a nuclear exchange.

During his four years in the Pentagon, from 1969 to 1973, Laird accomplished more than many could in a lifetime.

He was instrumental in the passage of the Strategic Arms Limitation Treaty and the expansion of U.S. nuclear deterrent forces through the development of the B-1 bomber, the Trident ballistic missile, and the multiple independently targetable re-entry vehicle (MIRV).

And although his service was framed by the scandal of the Nixon administration and the discord of the Vietnam War, Laird will be remembered for his integrity, his accomplishments, and his service.

In a tribute to Laird in 1997, President Gerald Ford noted that “few public servants have been so tested by events, or have so confirmed the confidence of their admirers, as Mel Laird in those days of tumult and challenge,” and that “no historian tracing the evolution of this country during the second half of the 20th century will be able to overlook [his] life and legacy.”

Ed Feulner, founder of the Heritage Foundation and congressional aide to then-Congressman Laird, said of his passing: “I lost a mentor and America lost a leader.”