After Royally Screwing Up the Election, the Media Want Control Over Your Facebook News 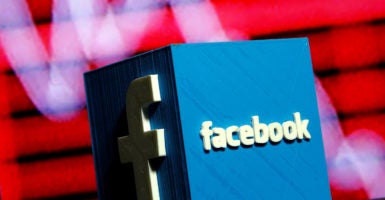 Facebook is under fire for "fake news" reports that Hillary Clinton supporters attribute to her defeat. (Photo Illustration: Dado Ruvic/Reuters/Newscom)

Christopher Bedford is editor in chief of the Daily Caller News Foundation.

The modern American media may have just had their worst year yet, and for their efforts, they have announced they’d like to reward themselves more power than they have held in decades.

The past year has seen a declining trust in the media that is fully deserved.

Debate moderators have been exposed as shills; network employees have been busted tipping the scales for their candidates (something this “senior media reporter” is sympathetic toward); political reporters have been caught running stories by their sources; “fact-checkers” have bent over backwards for Hillary Clinton; and major newspapers have openly cast objectivity aside—all in the name of a political candidate the media were so eager to elect, one legacy magazine shipped covers celebrating her victory before the votes were even counted.

After Donald Trump won the election, “renegade Facebook employees” reportedly formed a “task force” to crack down on the “fake news” they blame for Clinton’s sizable electoral defeat, aiming to purge social media of what someone, somewhere deems inaccurate.

In a landscape where the “fact-checkers” at “PolitiFact” said Clinton wasn’t laughing at a rape victim, just laughing at getting the rapist off the hook, this should concern Americans.

A 2016 study from Pew Research found that the most popular social media service is Facebook, which reaches 67 percent of adults, two thirds of whom get news on Facebook. So, Pew reports, “the two-thirds of Facebook users who get news there, then, amount to 44 percent of the general population.” No doubt, that incredible reach comes with great responsibility.

Proponents of the “fake news” ban say that social media has allowed for the spread of disinformation on a scale never before seen, and they’re right.

Made-up stories from fake-news sites happily bounce around the web, just as fake stories have been aired on television, broadcast on radio, and printed on presses—themselves technologies that, in their time, allowed for the spread of disinformation on a scale never previously seen.

Totalitarians across the planet may have been happy to seize these means of communication to stop news, both fake and real, and even in the United States, some prominent leaders dared—including Bill Clinton’s regulatory czar.

Facebook’s Mark Zuckerberg remembers well the backlash when members of his staff were caught “routinely” suppressing conservative news, and the episode causes us to wonder, what is “real news” to Facebook?

Were contested stories on the cause and players of the Benghazi attacks fake? Two days after the attack, The Week magazine seemed to blame a video, and as the bodies were flown home, The New York Times showed no curiosity for why two were former Navy SEALs.

We later learned a coordinated attack had been launched on not just the mission, but a CIA annex. When did that story become “real news”?

How about contested stories on Clinton’s health? Reporters at Vox called them “bonkers” on Aug. 23. After publicly questioning her health, Dr. Drew’s HLN show was canceled on Aug. 26.

A senator called the stories “sexist” and Andrea Mitchell called them “conspiracy theories” on Sept. 1. On Sept. 6, The Washington Post ran the headline, “Can we just stop talking about Hillary Clinton’s health now?” and Politico called it “bananas.” Five days later, Clinton collapsed in public. Is that when the story became “real news”?

Even old internet site Snopes got in on the coming-unglued-for-Clinton game.

These reporters, in alliance with like-minded people at Facebook, think it’s a great—and necessary—idea to crack down on media reporting outside their chosen narratives.

An assistant professor at Massachusetts’ Merrimack College agrees, helpfully circulating a list of outlets deemed unacceptable, including RedState, TheBlaze and IJR, adding that Fox News and Huffington Post are “not yet included in this list” but are in the danger zone.

Admittedly, fake news stories can be fun in an election year. Like that Politico bombshell that the Ku Klux Klan is distributing booze and weed to stop the vote.

That one—a story lacking basic reporting diligence—fit nicely into the reporter’s worldview and was picked up unquestioningly by outlets across the country, prompting national and local officials to act.

Or the Slate story that Trump had a secret Russian server, which Sen. Harry Reid clung to and Clinton’s campaign touted. The FBI moved quickly, calling the story false the very same day.

Or the aforementioned dozen stories that Clinton was in fine health and we should stop talking about it. Or The New York Times’ Election Day story that Clinton was 85 percent assured of the presidency. Or that Newsweek cover touting—Madame President.

But do these outlets have the modicum of self-awareness necessary to right the ship? Let’s let them answer. On Sunday, The New York Times wrote that it thought it reported the election “fairly,” and the same day reported that, “A newly vibrant Washington fears that Trump will drain its culture.”

On Tuesday, after an executive spoke highly of Trump, major outlets reported a fringe Nazi claim that New Balance are the sneakers of white supremacists, prompting a public statement from the company.

Reporter comparisons of Trump and Mike Pence to Adolf Hitler and the mafia continue to abound. And people both inside the media and inside Facebook called for an increase in progressive control of the news.

Having lost the public’s trust, it seems, the media plans to seize the forum.