Democrats Are in Disarray After Disastrous Election 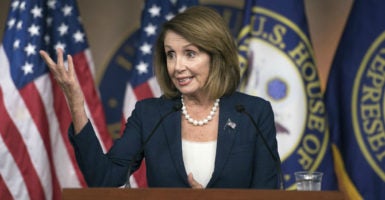 Democrats are in meltdown mode and it has nothing to do with climate change.

Not only did Republicans win the White House and retain control of both the House and Senate, they racked up big wins at the state level as well—not the least of which was winning the governorship of Vermont, not exactly the reddest state in the union, and the secretary of state in Oregon, which marks the first time in 14 years a Republican has won a statewide office there.

When you look at the trend over the past eight years, it gets really ugly for Democrats. When President Barack Obama first came into office in 2009, Republicans held 22 governorships. After this year’s election, they hold 33 with one race still pending. That is the highest number of GOP governorships since 1922. Republicans also now control 69 of 99 state legislatures.

And for anyone who thinks this tsunami snuck up on the Democrats, they should know that since 2009, Democrats have lost over 900 state legislative seats.

But this year, most pollsters and media intelligentsia were weaving a different narrative. According to them, the post-election headlines this time around were going to be about the demise of Republicans and the angst, turmoil, and finger-pointing that would leave the Grand Old Party in tatters.

Instead, these are the post-election headlines populating the news and opinion pages:

“The Democrats Screwed Up” —The New York Times

“Does the Democratic Party Have a Future?” —The Atlantic

Already, House Minority Leader Nancy Pelosi, D-Calif., has been forced to delay her party’s leadership elections where one House aide worried that “if changes aren’t made we will be in the political wilderness for many years to come.”

And while the media has focused on those protesting Donald Trump’s election, 17 people were arrested earlier this week while protesting outside incoming Senate Minority Leader Sen. Chuck Schumer’s, D-N.Y., office.

Democratic Party headquarters are in leadership turmoil, too, where two of the names being floated would suggest Democrats learned very little from 2016.

Howard “the screamer” Dean, former Democratic National Committee chairman and Vermont governor, has thrown his name in the hat as has Minnesota Rep. Keith Ellison, leader of the Congressional Progressive Caucus.

But perhaps the best examples of the meltdown come from two retiring Senate Democrats.

Sen. Barbara Boxer, D-Calif., is so distraught, she has filed legislation to abolish the Electoral College. Somehow it’s fitting that would be her final political play.

And outgoing Senate Minority Leader Harry Reid, D-Nev., apparently also did not get the “don’t be a sore loser” memo.

While Clinton was saying she hoped Trump would “be a successful president for all Americans,” and that “we owe him an open mind and a chance to lead,” Reid was calling Trump a “sexual predator” who has “emboldened the forces of hate and bigotry in America.”

As a sign that not all Democrats have lost their minds, West Virginia Sen. Joe Manchin slammed Reid’s remarks, saying they were “an absolute embarrassment to the Senate as an institution, our Democratic Party, and the nation.”

Such comments show the difference between Democrats who don’t have to face the voters again and those that do.