Why Poll-Watching Trends in Florida Are Harming Democracy 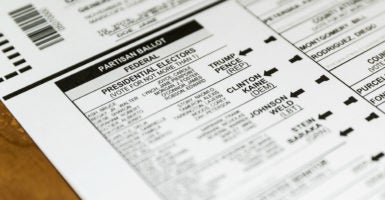 All Florida voters are allowed to vote by mail as long as they confirm that they are either unable or unwilling to go to the polls on Election Day. (Photo: Doug James/Zuma Press /Newscom)

Lisa Dixon is the director of publications at the Lawyers Democracy Fund, a nonprofit that promotes legal professionalism in the electoral process.

Last week, the specter of ballot fraud came alive in Florida when scores of mail ballots in Broward County were found to have been wrongfully opened by election officials in secret.

This episode comes not as an “isolated” incident, but sadly as the predictable result of a pernicious tactic of discouraging poll watchers from doing their job and monitoring what happens at local polls.

Florida has a unique ballot system. What used to be “absentee ballots” are now called “vote-by-mail ballots,” and they’re not just reserved for voters who live out of state. All Florida voters are allowed to vote by mail as long as they confirm that they are either unable or unwilling to go to the polls on Election Day.

Once election officials receive a vote-by-mail ballot, they check to make sure the signature on the voting certificate matches the signature on file with the voter’s registration record. This signature verification step is an important measure in protecting the integrity of the vote-by-mail process. It serves a similar role as Florida’s voter ID law, which protects the integrity of the election for those who vote in person.

One striking example of the risks involved in voting by mail comes from Seminole County in Florida. There, five people had their voting rights temporarily voided because multiple fraudulent impersonators had cast ballots by mail under their names with forged signatures.

In this case, a criminal investigation quickly revealed that the perpetrators had succeeded in a scheme to steal their votes. Once the truth had come to light, the victims had their voting rights restored and were able to cast their votes in person with regular ballots.

Thankfully, this case ended well for the voters, but it highlighted a weakness in Florida’s vote-by-mail system. The signature verification measure worked, but only after the fraudulent ballots had been flagged by election officials at the prompting of voters who realized that their ballots were missing.

One can easily imagine this case ending differently. If the voters had been less proactive, or if the forged signatures had been done more accurately, the outcome would not have been so bright.

But the threat of voter fraud is not limited to outside actors. In Broward County, election staff themselves violated the law when they were discovered to be counting mail ballots in secret. That’s a major violation of Florida’s Election Code—legally, mail ballots can only be opened under the supervision of an appointed canvassing board.

This illegal handling of mail ballots behind closed doors, with essentially no public access, resulted in threats of litigation by the Florida GOP only days before the election.

In a quick response, the supervisor of elections reversed her untenable position and agreed to hold public canvassing board meetings and allow the political parties and candidate representatives to be present when the mail ballots are opened and reviewed.

This would be encouraging if it weren’t tainted by new and more recent allegations that local election staff were replicating damaged ballots without the required oversight. This could potentially amount to blatant fraud.

These disturbing patterns reveal an unacceptable lack of transparency in our voting processes, and they sow distrust throughout our entire electoral system and expose real vulnerabilities. With regard to poll watching in Florida, we need reforms that strengthen the right to observe both the canvass and voting in the polling place and require a partisan balance of observers at both.

And with regard to vote-by-mail ballots, Florida should consider additional measures to confirm the identity of mail ballot voters, such as requiring copies of their personal ID or their Social Security or driver’s license number. Florida voters love the convenience of mail ballots, but they also deserve a system that is fair and deters voter fraud.

The more certain we can be about the identity of voters, the better. Similarly, when democracy can be monitored on the ground by people from both sides of the political fight, it only increases the integrity of our elections—and strengthens the American people’s confidence in the results.