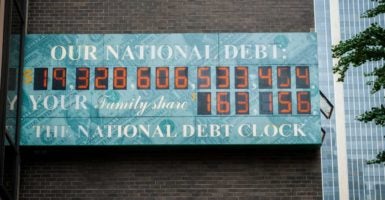 The National Debt Clock in New York on July 22, 2016. The amount has since risen and is estimated to hit $20 trillion in February 2017. (Photo: Richard B. Levine/Newscom)

The next president will face a nation debt of $20 trillion, nearly double what it was when President Barack Obama took office.

The national debt likely will reach the staggering $20 trillion figure in 2017, according to the Bipartisan Policy Center, a Washington think tank.

On March 16, the new president and Congress will have to reach an agreement on the debt limit—which will likely be $20.1 trillion, according to the center’s projection. That will last until mid-summer, before another negotiation will ensue on borrowing more to pay the government’s bills.

“There are a number of uncertainties between now and then and we don’t know exactly what the revenues and outlays will be, but we project the total gross debt will hit $20 trillion sometime in February,” Shai Akabas, director of fiscal policy for the Bipartisan Policy Center, told The Daily Signal in a phone interview.

“Health care is the biggest driver of government spending with Medicare and Medicaid,” @ShaiAkabas says.

“February is typically a bad month for the national debt because a lot of tax refunds go out then.”

To put the $20 trillion figure in perspective, MarketWatch reported in September the combined valued of all 500 major corporations in the S&P 500 were valued at $19.1 trillion as of the summer of 2016. These companies include Apple Inc., Exxon Mobil Corp., Facebook, and other giants.

The Congressional Budget Office projects that gross debt in 2017 will reach $20.16 trillion, but did not have a month-by-month breakdown as of deadline. The budget office’s 10-year debt projection estimates the national debt will reach $28.19 trillion in 2026. The amount of debt held by the public will be 77.2 percent of the gross domestic product in 2017.

By 2026 the publicly held debt will be 85.5 percent of the economy, according to the budget office.

Treasury Department spokesman Rob Runyan told The Daily Signal that the department does not have a projection to share.

For the next president and Congress, the challenge will be to slow the rate of debt’s growth. This is because a cut in the national debt won’t come unless there is a budget surplus, which no one projects, Akabas said.

Akabas thinks a deal for bipartisan entitlement and tax reform is possible over the next two or four years, while both parties will have areas where they want to spend more.

“Health care is the biggest driver of government spending with Medicare and Medicaid,” Akabas said. “But, Republicans are concerned about defense and Democrats are worried about domestic [spending]. There will be some dialogue about giving back in those areas.”

While divided government can lead to gridlock, Akabas also has some optimism.

Congress and the new president could reach a bipartisan plan to tackle the debt in a way that wouldn’t cause one party to be blamed. Further, he said he anticipates such a debt plan—that would require some unpopular actions—could be offset with popular items such as more infrastructure spending.

There are actions that Congress and the next president can take to rein in the debt, but the problem might be what realistically will be done, said Romina Boccia, deputy director of the Thomas A. Roe Institute for Economic Policy Studies at The Heritage Foundation.

“A lot can be done in the next administration’s budget proposal and with Congress’s follow up,” Boccia told The Daily Signal. “Neither candidate for president has a strong plan for addressing the debt.”

She said there is still potential to control the debt.

“The House Budget Committee has presented a plan that can make a real difference,” Boccia said. “Any plan will have to include entitlement reforms, health care spending reforms, and Social Security reform.”