Tackling the Claims of ‘Right to Die’ 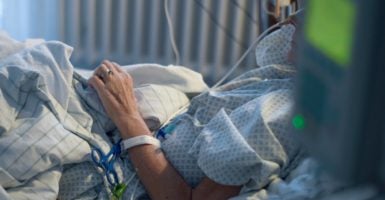 Physician-assisted suicide allows a medical professional you don’t know to decide if your life is worth living. (Photo: Britta Pedersen/dpa/picture-alliance/Newscom)

If Colorado votes “yes” on Proposition 106 next week, it will become the sixth state to allow physician-assisted suicide. The District of Columbia is looking to adopt similar legislation.

End of life care is deeply personal. Watching a loved one suffer is something no one ever wants to do. And if you’ve been in the position to care for someone as they lay dying, you know that you’d give anything to relieve their pain.

Needless to say, this issue is emotional. This means the common ground you find, the examples you cite, and the words you use matter a lot. Your goal isn’t to present a dry, emotionless argument, but to tread lightly with the right emotion.

Here is how to do just that and call out the “death with dignity” and “right to die” movements for what they are.

You see a toddler fall and scrape his knee and you immediately want to comfort him.

You watch a friend care for her dying husband and you want to alleviate both her pain as the caretaker and his pain as the terminally ill.

>>> According to Oregon’s Numbers, Here’s What Will Happen If Assisted Suicide Is Legalized Nationwide

Though it seems obvious that suffering is never anyone’s goal, it’s important to state it. If you start rattling off statistics without first establishing your motivation, you risk allowing the person on the other end of your conversation to assume the worst.

Instead, reiterate that suffering is painful, and messy, and hard, both for the one experiencing it and their loved ones. We should be looking to innovative medical care and better hospice treatment to manage pain at all price points.

It’s the working out of this desire to its logical conclusion that calls for discussion.

The best way to communicate your position on a sensitive issue is to use examples and anecdotes, and highlight the consequences not widely reported in the mainstream media.

A terminally ill patient in a state with physician-assisted suicide says she received a letter from her insurance company explaining that it’s cheaper to cover the medication to end her life than purchasing the medication to ease symptoms.

In other words, your chemotherapy is more expensive than this pill to end your life, so we can no longer cover your chemotherapy treatment. This is a scary reality, especially as the government becomes more involved.

If you want to use the power of a story, it’s worth citing J.J. Hanson’s experience (as covered by The Daily Signal a few weeks ago).

Physician-assisted suicide is also an issue for the most vulnerable among us. Think the elderly and disabled.

Physician-assisted suicide allows a medical professional you don’t know (and who doesn’t know you) to decide if your life is worth living. Advocates will argue that there are rules in place—18 years old, mentally fit, less than six months to live—to prevent coercion. But the possibility remains, and studies show otherwise.

Last, it may be helpful to note the implication for doctors and religious liberty. If you’re practicing medicine in a state with physician-assisted suicide and your faith instructs you not to take a life, is your job in jeopardy if you refuse a patient their right to die? Possibly.

There are a lot of euphemisms thrown around when people discuss physician-assisted suicide—“death with dignity,” “aid in dying,” “right to die.”

These phrases make it seem impossible for anyone to disagree with legislation that seeks to promote an end to suffering via “death with dignity.” But talk about the disabled as people who “live with dignity” and explain that those suffering with a terminal illness still have the “right to live.”

Remember: There is a lot of emotion on either side of this argument, so find that common ground and use it to your benefit before launching into examples and statistics.

Don’t shy away from reclaiming the words and phrases the other side likes to use. They may cite “death with dignity” as void of suffering, but there is a case to be made to the contrary.

This commentary has been modified to specify that Montana, not Massachusetts, allows physician-assisted suicide.