Voters to Decide Legality of Physician-Assisted Suicide in Colorado 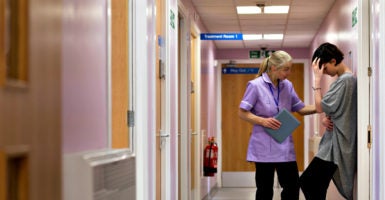 "Organizations who advocate for the disabled are especially against the measure," says a leading opponent of legalizing physician-assisted suicide in Colorado. (Photo: iStock Photos)

Colorado could become the sixth state to make physician-assisted suicide legal when voters go the polls next month.

“Doctor-assisted suicide is sold as a personal decision to end suffering at the end of a person’s life,” @jeffhunt says.

Called Proposition 106, the ballot question in Colorado would allow a “terminally ill individual” to request and self-administer “aid-in-dying medication” as a way to end his or her life voluntarily. Whoever seeks assisted suicide would have to have a prognosis to live six months or less.

Jeff Hunt, director of the Centennial Institute, a conservative think tank affiliated with Colorado Christian University, is leading the fight against the ballot initiative.

A Colorado-based group called Compassion & Choices “has been trying to push this measure through for the past two years,” Hunt said in a phone interview with The Daily Signal. “This measure has failed because it has faced opposition from both Democrats and Republicans who realize that it is bad for the state of Colorado.”

Compassion & Choices describes itself as an organization that campaigns for expanding “end-of-life options,” including what some call the right to die.

“For most people with a terminal illness, hospice and palliative care are the right fit,” Holly Armstrong, spokeswoman for the campaign in Colorado, said in a statement to The Daily Signal, adding:

But sometimes even the best care cannot relieve pain and suffering. People in that situation should have a range of options for treatment.

While many see it as a way to end suffering, Hunt told The Daily Signal, the implications of the practice go much further.

“Doctor-assisted suicide is sold as a personal decision to end suffering at the end of a person’s life,” he said. “Those pushing for its legalization say that it allows a terminally ill patient in his or her very last days to part with loved ones in peace.”

If passed, the initiative would amend Colorado law to allow physician-assisted suicide.

What supporters of Proposition 106 are not saying, Hunt said, is that, if passed, the measure would affect many more people than those who request the procedure. He said:

In Oregon and Washington state, where physician-assisted suicide is already legal, individuals with terminal illnesses are getting letters from their insurance companies that are saying, ‘Your medication is too expensive for us to continue your coverage. However, we will pay the $100 for you to terminate your life through doctor-assisted suicide.’ “Walking down this path of legalization of doctor-assisted suicide is dangerous for Colorado,” says Jeff Hunt, director of the Centennial Institute at Colorado Christian University. (Photo: Jeff Hunt Facebook)

In the states where physician-assisted suicide is already legal, Hunt said, the medical and insurance communities are restricting the choice to live. This should not be the case at all, he said, due to the advanced nature of hospice care today.

“The hospice community has come a long way in providing great hospice care for those who are in their very last stages in life. Walking down this path of legalization of doctor-assisted suicide is dangerous for Colorado,” he said.

Hunt cited a 2005 statement from Dr. Katrina Hedberg, state epidemiologist and health officer in the Oregon Public Health Division, saying his concerns echo hers: “We are not given the resources to investigate [assisted-suicide cases] and not only do we not have the resources to do it, but we do not have any legal authority to insert ourselves.”

Melody Wood, a research assistant in the DeVos Center for Religion and Civil Society at The Heritage Foundation, said legalization is ripe for abuse.

“Physician-assisted suicide is bad policy that corrupts the practice of medicine,” Wood said. “Assisted suicide laws lead to the marginalization of the weak and persons with disabilities, and can easily be abused. Those nearing the end of their lives should be treated with true compassion and appropriate care, not told that they would be better off dead.”

Hunt said Colorado’s younger population tends to be more favorable toward legalizing physician-assisted suicide, while older residents increasingly are against it.

“If young people are already pro-life, they are very much opposed to this bill,” he said. “General polling shows that the younger population is more supportive of it. However, the older they get, the more people oppose it, because they see the implications it will have on the state of Colorado.”

Hunt said the state’s churches and other religious organizations are sharing their positions on Proposition 106.

“The faith community is working together to educate their respective churches on this issue,” he said. “The Catholic Church is aggressively doing outreach against the measure. The Denver Archdiocese has released three sermons on this proposition for pastors to use in educating their congregations about doctor-assisted suicide. The Mormon community and Eastern Orthodox community are also working against it.”