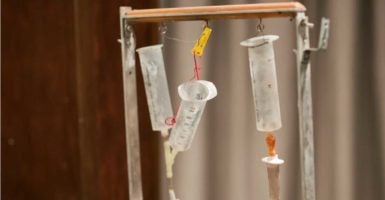 “Supporters claim physician-assisted suicide gives patients choice, but what sort of a choice is it when life is expensive but death is free?” asks Dr. William L. Toffler. (Photo: Richard B. Levine/Newscom)

Even the best intentions cannot reverse the insidious effects of a wrong policy. When those who advocate for assisted suicide cite a benevolent desire to relieve suffering, the horrifying results of such a practice still lie just beneath the surface.

Recently, an elderly Vermont woman found herself repeatedly pressured to commit assisted suicide. Her grave ailment? Only a broken wrist. Nevertheless, staff at her rehab center “repeatedly asked the elderly woman if she was in pain or depressed; then they would remind her that she could commit doctor-prescribed suicide under the new law.”

Advocates of assisted suicide have blown off claims that these laws could lead to this sort of pressure to die. But in the face of high end-of-life costs, Guy Page of the Vermont Alliance for Ethical Healthcare said, “It doesn’t take a health care economist to see the shortest distance in finding ways to reduce health care costs is physician-assisted suicide.” This means that in some circumstances, the main factor in “choosing” to die could very well be more related to money than patient condition.

‘Life Is Expensive but Death Is Free’

Oregon displayed a grim example of such pressures when the state Medicaid program began informing patients and doctors that many prescription medications and painkillers would not be covered—but assisted suicide would.

Barbara Wagner, a lung cancer patient, received one such letter. She recalled, “I got a letter in the mail that basically said if you want to take the pills, we will help you get that from the doctor and we will stand there and watch you die. But we won’t give you the medication to live.”

As physician Dr. William L. Toffler wrote, “Supporters claim physician-assisted suicide gives patients choice, but what sort of a choice is it when life is expensive but death is free?”

Based on research concerning Oregon’s assisted suicide experience, those who choose to die frequently do so for reasons other than unbearable pain, such as loss of autonomy, dignity, or ability to engage in enjoyable activities. In other words, some who turn to death as a final recourse are suffering what could be alleviated by a society that values life enough to assist in healthy coping rather than death.

The bottom line is that assisted suicide laws lead to an increase in suicide for all the worst reasons. And it is a slippery slope: In the Netherlands, euthanasia is now practiced on individuals who are not terminally ill, but suffer from depression and other psychiatric illnesses. Babies are being euthanized there, too, because their parents or doctors “deemed their suffering too difficult to bear.”

As Wesley J. Smith, a senior fellow at the Discovery Institute’s Center on Human Exceptionalism, has said, those pushing assisted suicide should “stop pretending” that it is “about terminal illness and admit it is much more about disability—which is why the disability rights movement remains so opposed as they are the primary targets.”

Instead of encouraging—or even pressuring—those most vulnerable, what if more terminally ill patients and their families were able to share an experience similar to that of Toffler and his late wife:

Last year my wife, Marlene, died of metastatic cancer. We’d been married for 40 years. The final five years we both knew she would inevitably die of her cancer. At one point doctors told her that she had only three to nine months left, yet she lived more than four times as long. While I treasure all of our years together, the last years of our marriage were among the best. There was great suffering but also great joy and meaning in the special moments we and our seven children shared together—moments that became all the more special the closer we came to the end of her life. I wouldn’t trade a nanosecond of those last years. She died peacefully and naturally at home surrounded by her family and friends. She never took an overdose, yet her death and life had great dignity.

As Smith says, the assisted suicide movement “is about allowing killing as an acceptable answer to many causes of suffering, whether terminal or chronic disease, disability, mental illness, or existential despair.” Once you open that door, it leads to “virtual death-on-demand.” And that is something we should all oppose.