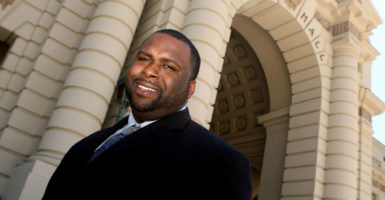 Dr. Eric Walsh claims he was fired from a Georgia health agency for what he preached in his sermons. (Photo: Keith Birmingham/Zuma Press/Newscom)

A public health official who also is a lay minister says he will not turn over his sermons and related documents to the state of Georgia, which he contends fired him for what he preached from the pulpit of his church.

“My faith has fueled me,” Dr. Eric Walsh, who served as an associate pastor and still preaches, said at a press conference Wednesday at the Georgia State Capitol in Atlanta. “I want to be able to protect the faith of others, so I really have no intention of turning over the sermons.”

Walsh, 45, accepted a job as district health director with Georgia’s Department of Public Health in May 2014. He expected to start work around the middle of June, according to his lawyers at First Liberty Institute.

But a week later, officials with the health agency requested copies of sermons Walsh had preached before congregations of the Seventh-day Adventist Church.

After reviewing the contents of the sermons, the agency fired Walsh, according to First Liberty, a legal organization that defends religious freedom.

Walsh’s sermon topics include compassion for the poor, health, marriage, sexuality, world religions, science, and creationism, his lawyers say. In 2014, the Los Angeles Times noted a controversy over his sermons on homosexuality and evolution.

>>> The ‘Chilling’ Reason This Doctor Says Georgia Fired Him

Walsh previously served as director of the Public Health Department in Pasadena, California, for four years. He has a medical degree and a doctorate of public health and is a former member of the Presidential Advisory Council on HIV/AIDS.

As The Daily Signal previously reported, Georgia Department of Public Health spokeswoman Nancy Nydam said Walsh’s religious beliefs “had nothing to do with the decision to withdraw the [job] offer.” In an email to The Daily Signal, Nydam wrote:

Walsh has said the situation was “devastating.”

“It has been and would be very difficult for me to work in public health based on the things that have transpired,” Walsh told The Daily Signal in a phone call Wednesday before his press conference.

On behalf of Walsh, First Liberty Institute and the Atlanta law firm of Parks, Chesin & Walbert sued the Georgia Department of Public Health in April for religious discrimination.

“What’s really shocking right now is the state of Georgia is requiring this pastor to turn over his sermon notes and transcripts,” Jeremy Dys, senior counsel for First Liberty Institute and counsel for Walsh, told The Daily Signal. “There’s no subject limitation. There’s no time limitations … every sermon he’s produced since he was about 18 would have to be turned over to the state of Georgia.”

In late September, the state of Georgia requested as part of the legal case that Walsh hand over copies of his sermon notes and transcripts, along with other documents related to his ministerial training, service as a pastor, and publication or postings of his sermons online.

“This is an incredible intrusion upon the sanctity of the pulpit.” —@jeremydys

“Any document that has a note or a transcript having to do with his sermons are required to be produced,” Dys told The Daily Signal. “That means that the notes he writes in the margins of his Bible—the Bible has to be produced now. Anything he’s written on his computer has to be turned over. … This is an incredible intrusion upon the sanctity of the pulpit.”

I think every pastor, every rabbi, every church leader in the state of Georgia should be very concerned when their government is refusing to pass laws that would protect their religious liberty and now ransacking the pastor’s study to try to find information and evidence that they can use to justify their illegal behavior in firing Dr. Walsh. That’s wrong. It’s illegal.

A spokeswoman for the Georgia Department of Public Health told The Daily Signal Wednesday the agency does not comment on pending litigation.

In a press release, Dys said it was “clear” the Georgia agency “fired Dr. Walsh over his religious beliefs, which is blatant religious discrimination.”

Also Wednesday, the Family Research Council, a Christian policy organization based in Washington, called on Georgia Gov. Nathan Deal, a Republican, to “correct this egregious overreach of the state into church affairs.”

“This is something that I would have expected to see in a communist country, not America,” Tony Perkins, president of the council and an ordained pastor, said in a written statement. “The pulpit is to be governed only by the word of God. Government scrutiny of speech in the pulpit is unconstitutional, and unconscionable.”