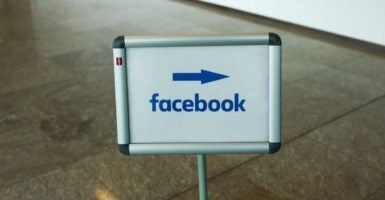 Facebook and Twitter are receiving pressure from Germany to crack down on hate speech online. (Photo: StephanieLoos /Reuters/Newscom)

Last month, German Justice Minister Heiko Maas suggested that Facebook and Twitter could be held criminally liable if they do not step up their efforts to remove content considered “incitement to hatred” according to the Financial Times.

Among Maas’ contentions were that Facebook was more likely to remove content that was flagged by a government-funded entity than by a private individual.

According to the justice minister, when organizations like watchdog groups “reported abusive comments on Facebook, they were deleted ‘relatively quickly,’” the Financial Times reported. However, comments reported by individual users were deleted only 46 percent of the time.

“The more affected companies [such as Facebook] manage to live up to their responsibilities in this area, the less we will need to push for more regulations,” Maas said, according to Deutsche Welle, Germany’s international broadcaster.

On Twitter, Maas went on to say that “Facebook is still deleting too little and too slowly. Hate crime doesn’t belong online, but in court.”

Germany’s legal definition of what constitutes “incitement to hatred” is, in part, when:

Incitement to hatred carries a prison term of three months to five years.

The German Federal Criminal Police Office cracked down on social media hate speech earlier this year, carrying out a series of police raids on homes of people who had posted allegedly racist views on Facebook. The raids were conducted by 25 different police departments across 14 different provinces.

In a press release, the police office stated that the raids were in response to a “strong rise in verbal radicalism,” reported The Verge. About 40 investigations were opened as a result of the raids.

Some have attributed the rise in hate speech to the sudden increase in the immigrant population. Roughly 1 million refugees, mostly from Iraq, Syria, and Afghanistan, were admitted to Germany last year.

“The [series of raids] carried out … shows that the authorities are acting firmly against hate on the internet, which has grown considerably in the wake of the refugee situation,” Holger Münch, head of the Federal Criminal Police Office, said in a statement, according to The Verge. “Attacks on refugees are often the result of radicalization, which begins on social networks. These words should not poison the social climate.”