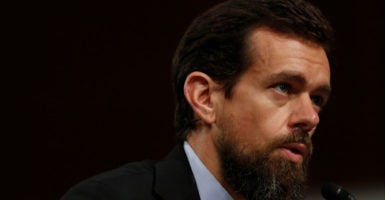 Twitter made headlines recently when it denied the Center for Immigration Studies, a nonpartisan group, the ability to promote four tweets that—according to Twitter—contained “hateful content.”

What was that hateful content? The legally correct phrases “illegal alien” and “criminal alien.”

To be clear, those who follow the Center for Immigration Studies on Twitter were able to see these tweets, but the organization was prevented from paying Twitter to disseminate the posts beyond its own followers.

Twitter subsequently decided that the group could promote the tweets after it protested.

In recent years, those on the progressive left has decided to censor terms that, despite being accurate and legally correct, do not meet their views of the prevailing political orthodoxy.

They prefer terms such as “undocumented immigrant” that are intended to disguise the illegality of aliens who cross our borders without permission. The difference in meaning between these terms is actually crucial when understanding and correctly discussing different types of immigration.

As noted in a previous article, “Under federal law, any individual in this country who is not a citizen is an alien.”

“And any alien who is here without permission is here illegally. End of story.”

The terminology is clearly correct under both immigration law and Supreme Court precedents, but the left understands that controlling language and content is the key to controlling public discourse.

Not only did the tweets contain accurate language, they also included key information and facts relevant to the debate over enforcement of our immigration laws.

Apparently, however, talking about sanctuary cities and the safe haven they provide for criminal aliens or talking about the often-violent crimes committed by illegal aliens is unacceptable in the eyes of the Twitter censors.

This is not the first time that a major social media company has been in the hot seat for deciding which opinion will be deemed worthy and which one can’t be allowed to see the light of day where it might actually influence the opinions of the public.

Facebook recently announced that it will expand its current “fact-checking” process of articles, pictures, and videos, where a highly subjective determination of supposed “falsehood” can decrease an article’s reach on Facebook by 80 percent.

But who are the fact-checkers? According to Facebook, its approved third-party fact-checking groups are Snopes.com, PolitiFact, FactCheck.org, the Associated Press, and The Weekly Standard. Of the five groups, The Weekly Standard is the only outlet that made a recent decision by these organizations to mark a ThinkProgress article as false. (If two fact-checkers disagree on a rating, then Facebook won’t take action to reduce the article’s distribution, according to Fox News.)

The controversy arose from the title of the article, “Brett Kavanaugh said he would kill Roe v. Wade last week and almost no one noticed.”

Similar to the Center for Immigration Studies’ tweets, the controversy hinges on semantics. In the same way that it is factually incorrect to refer to “illegal aliens” as “undocumented immigrants,” it is patently false to assert that Kavanaugh “said” something that there is zero evidence of him saying.

The determination made by the fact-checkers, including The Weekly Standard, put the left in an uncomfortable situation. Some chose to recognize the dishonesty of the headline and offer better wording, while others chose to double down on the supposed ideological nature of the controversy.

The author of the article, Ian Millhiser, responded to The Weekly Standard, saying that it has “a history of placing right-wing ideology before accurate reporting.” The author went  on to defend his false title by claiming its “fact-check appears to hinge on the definition of the word ‘said.’” (Sound familiar?)

The author then claimed that “said” can also mean “indicate,” but the author chose to use the word “said” to describe events that never actually occurred.

He then attacked the credibility of The Weekly Standard as a fact-checker and claimed that it was chosen by Facebook “as part of a deliberate effort to pander to conservatives.”

On the front lines to defend the duplicitous title was Zack Beauchamp at Vox. He published a response, “Facebook blocked the spread of a liberal article because a conservative told it to.” If the title doesn’t make his point of view obvious enough, he writes that the “feud is less about facts and more about abortion rights.”

He conceded that the headline of the ThinkProgress article is misleading, but thinks that the publication should have gotten a warning and a chance to correct the mistake.

Would he have taken such a soft approach if the ideological positions had been reversed? Beauchamp claims that the issue of censorship is difficult because the platform “hasn’t grappled with the very long history of conservatives using allegations of bias to discredit neutral media and elevate their own perspective.”

He ignores the numerous studies by organizations such as the Media Research Center that have documented the overwhelmingly left-wing bias of the media.

Others on the left took a different approach. William Saletan at Slate pointed out the real issue here is that “most of us, including me, are good at seeing other people’s biases, but lousy at seeing our own.”

Saletan makes the important observation that ThinkProgress has proved “the opposite of what they intended” and that “the press is full of left-leaning journalists who sometimes can’t see or acknowledge congenial falsehoods.”