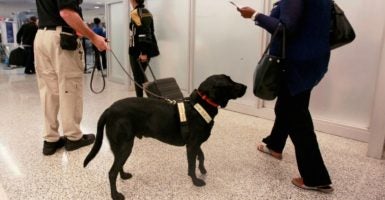 In the wake of the New York and New Jersey bombings, and coming on the heels of the 15th anniversary of Sept. 11 last month, security measures like bomb-sniffing dogs are getting a lot of attention.

Bomb-sniffing dogs are an essential component of security, keeping Americans safe at home and especially as they travel. Yet bomb-sniffing dogs in airports across the United States are failing to pass certification tests, causing serious concern.

A recent investigation by NBC News concluded that in 10 major U.S. airports, K-9 teams failed to pass their annual certification testing more than 50 times between January 1, 2013, and June 15, 2013.  At Dulles International Airport, the K-9 teams failed an alarmingly high 10 times. These K-9 teams are funded by the Transportation Security Administration.

While some failures are to be expected, bomb-sniffing dogs are an important piece of airport security, making these findings very worrisome. Once a K-9 team fails, it is banned from working until the dogs retest and meet the proper certification standards. Still, as reliance on bomb-sniffing dogs increases, so does the expectation that they will exceed the qualifications put in place by the TSA.

Security experts and government oversight organizations have pointed to K-9 unit training as critical to their success. The Government Accountability Office found that from 2011 to 2012, several K-9 teams did not comply with the TSA’s monthly training requirements on multiple occasions. Without consistent training, bomb-sniffing dogs are not capable of protecting airports properly or passing their annual certifications.

These incidents highlight a need for privatizing airport security. The Screening Partnership Program, created in 2001, replaces the TSA with private screeners in airports. With the program’s screeners in place, the TSA’s role shifts to oversight, ensuring that security regulations, such as K-9 training requirements, are being fulfilled.

More airports should recognize and join the Screening Partnership Program. It would allow the TSA to focus on assessing the state of security at airports and ensure that risks are being properly handled. If airports are not satisfied by a private security contractor, they should have the ability to fire and replace them if necessary.

Congress should also make it easier for airports to join the program. There are unnecessary regulations currently in place that severely delay and hamper the process. For instance, the TSA needs to stop hand-picking the private security contractor who replaces them. Instead, the airport should be allowed to choose from a pre-approved list of vendors, allowing airports to choose the best contractor for their needs.

Expanding participation in the Screening Partnership Program would go a long way to improving the underperforming TSA, and would create a safer airport environment. Airport security has come a long way since Sept. 11, 2001, but the failures of bomb-sniffing dogs show there are still improvements to be made.