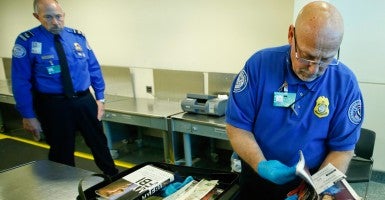 TSA failed to stop undercover agents in 67 out of 70 recent probes, according to ABC News. (Photo: Kamil Krzaczynski/EPA/Newscom)

In an exclusive scoop, ABC News is reporting that the Transportation Security Administration failed to stop undercover agents in 67 out of 70 recent probes of TSA screening. These agents carried fake weapons through checkpoints at major airports across the country and were not stopped.

ABC reports that Jeh Johnson was “apparently so frustrated by the findings he sought a detailed briefing on them last week at TSA headquarters.”

Johnson has good reason to be frustrated: Such a high failure rate is unacceptable.

The inspector general’s report is not available publicly and will likely be classified for security reasons. This should not stop Congress, however, from investigating this matter and reviewing the remedial actions that are being taken.

Importantly, it exposes the reality that government screeners are not necessarily the right answer to airport screening.

Almost all European countries and Canada use private airport screeners. In the United States, airports have the right to opt out of TSA-administered screening through the Screening Partnership Program, which swaps out TSA screeners in favor of private contractors with TSA oversight. SPP has been found to result in screening that is more efficient, more customer friendly, less costly, and more secure.

With all these benefits and the precedent set by Europe and Canada, SPP is a no-brainer. Sadly, the program is subject to burdensome regulations and bureaucratic processes that limit its use.

So while Congress should ensure that the TSA fixes the current holes in airport screening, lawmakers should also consider expanding SPP as a longer term solution to improve transportation security.