Tired of the TSA? Here’s Why Private Screeners Are the Answer 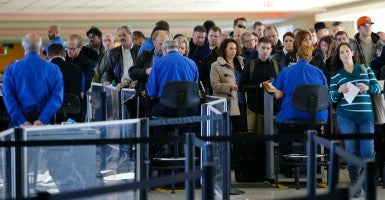 Perhaps unsurprisingly, most of Europe and Canada use private screeners because of their benefits. (Photo: Kamil Krzacynski/Newscom)

Congress is considering giving the Department of Homeland Security the authority to move around some of its funds to the beleaguered Transportation Security Administration as lines at airports grow. While this redirection might be a short-term solution (and maybe not even that as it will take time to hire and train these screeners), it is time for Congress to rethink airport screening for a long-term solution.

It’s time to allow the private sector to manage the screening line through the expansion of the Screening Partnership Program.

The Screening Partnership Program was created by Congress so airports could take advantage of private sector efficiency in the screening lines while still remaining under TSA oversight and security rules. One estimate by the House Transportation Committee found that switching the largest 35 airports to the program would save $1 billion over five years. It should come as no surprise that the private sector is better able to manage a workforce at lower cost, which means better staffing at airports.

Lest Congress fear that this efficiency has other costs or side effects, the program’s screening has also reported higher customer satisfaction and security that is as at least as good as the TSA. And unlike the TSA, if a private screener falls below acceptable standards, it can be easily replaced.

Sadly, the Screening Partnership Program faces crippling and unnecessary regulations that make it hard for airports to access the benefits of the program. For example, the TSA hand-picks which contractor will work at a Screening Partnership Program airport rather than let airports choose from a list of approved vendors. The wait time to join or renew the program’s status can drag on for years. The prior TSA administrator even tried to unilaterally freeze the program before Congress intervened.

Perhaps unsurprisingly, most of Europe and Canada use private screeners because of their benefits. San Francisco, Key West, Kansas City, and 19 other airports are currently Screening Partnership Program airports, and Seattle has recently suggested it might look to private screeners in light of growing lines. It’s time Congress made it easier for airports to join the program so travelers can get out of TSA lines and onto their destinations.