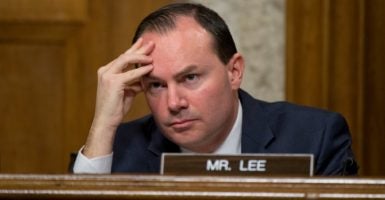 In a selfie-video, Sen. Mike Lee, R-Utah, explains why he voted against a short-term spending bill and says he plans to oppose all such deals. (Photo By Tom Williams/CQ Roll Call/Newscom)

The short story behind Lee’s 12-minute selfie-video on Facebook Live: The Utah Republican voted against the measure and is frustrated with the way Washington spends taxpayer dollars.

“We have two people running the show, two people writing this continuing resolution, two people negotiating in private—in secret, if you will—what the bill is going to be,” Lee says in the video, referring to Majority Leader Mitch McConnell, R-Ky., and Minority Leader Harry Reid, D-Nev.

That last-minute scramble, Lee argues in the video, allows “a small handful of legislative leaders” to wield big influence on spending bills with little input from individual members of Congress.

“And at the end, the democratic process is thwarted, thwarted quite dramatically as a result of this,” Lee says. “That’s why I couldn’t vote for this.”

That procedure requires bringing 12 individual spending bills to the Senate floor for debate. Lee argues that would allow each member to help craft the bill rather than letting leaders from both parties negotiate its content in secret.

But in his video, Lee admits that wouldn’t happen until members of both houses refuse to vote on any stopgap spending measure again:

It will continue unless or until such time as we have more members willing to say, ‘No. Heck, no. I’m not voting for this on my watch, not ever. If you give me this sort of process I will vote no because my constituents demand more, they expect more, and they deserve better.’

The Senate approved the continuing resolution by a 72-26 vote Wednesday evening, followed by the House, which approved it by a vote of 342-85 at about 10 p.m.

Most of the House opposition came from members of the conservative Freedom Caucus and the larger Republican Study Committee.

One member who balked at the process and voted no, Rep. Warren Davidson, R-Ohio, sounded like an early adherent to Lee’s proposal.

“I intend to vote ‘no’ on the continuing resolution brought to the floor tonight,” Davidson said in a written statement. “It continues the trend of what I call ‘math denialism’—acting as though numbers don’t matter and that we can spend without consequences.”