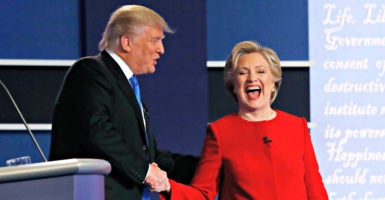 Tax reform remains a central issue in Washington because of its overwhelming necessity.

Tax reform is badly needed to revive the slow-growing economy and increase job creation and wages for American families. The current tax system is a large weight holding the economy back from growing as strongly as it could, thereby suppressing opportunity for Americans at all income levels.

To free the economy to grow larger, tax reform must lower marginal tax rates for families, businesses, investors, and entrepreneurs. Lower rates would increase their incentives for working, saving, investing, and taking risks.

These activities are the basic elements of economic growth. When more of them occur, the economy grows faster.

The right kind of tax reform also would need to eliminate the multiple layers of tax on saving and investment. The current system applies these multiple layers, raising the marginal tax rate on these economically crucial activities and consequently stunting job creation and wage growth.

Lastly, tax reform should make sure the tax code does not pick winners and losers in the marketplace.

The business side of the tax code is most badly in need of repair. The U.S. has the highest corporate income tax rate in the developed world, as defined by the countries in the Organization for Economic Cooperation and Development.

The U.S. is also one of only a few countries that taxes its businesses on their foreign income. Under the tax code’s cumbersome system of depreciation, businesses must deduct the cost of capital over many years.

Tax reform would need to abandon worldwide taxation and move to a territorial system of taxing only businesses on the income they earn domestically. It also would need to allow businesses to fully deduct, or expense, the cost of capital when they make such purchases.

If Congress constructed a plan that adhered to these principles, it could increase economic growth by as much as 15 percent over 10 years.

To achieve these aims, conservatives generally favor a system that eliminates multiple levels of taxation levied on saving and investment, which can be accomplished through a consumption tax.

There are four ways to establish such a system:

• A flat fax, either the traditional method or a consumed income method.
• A national retail sales tax.
• A business transfer tax.
• A hybrid of these approaches.

Whether tax reform becomes a reality depends on its status in Congress and whether the president has a plan and makes that plan a prominent part of his or her agenda.

In the House of Representatives, Republicans released a tax reform blueprint earlier this year that adhered to many of the principles outlined above.

The blueprint would lower tax rates for everyone, reduce taxes on saving and investment, create a territorial system, and establish expensing. It also would abolish the estate tax, better known as the death tax. It could benefit, however, from a better treatment of interest.

House Republicans’ blueprint bodes well for tax reform. Should the House follow through and write a bill that follows the blueprint, it would create a tax plan that would grow the economy more than 9 percent over a decade.

Republican presidential candidate Donald Trump has a tax reform plan too. His plan would reduce rates for families to the same levels as the House blueprint.

The Trump plan also would reduce rates on saving and investing. It would lower the rate for businesses to 15 percent, although it remains unclear to which businesses the rate applies.

It would allow more businesses to expense their capital purchases. It would maintain a worldwide tax system. And it too would eliminate the death tax.

The plan is strongly pro-growth, although not as much so as the House blueprint. It would grow the economy between 6.9 percent and 8.2 percent, depending on how it treats pass-through businesses.

The Trump plan would benefit strongly from greater clarity on what tax rate pass-through businesses pay.

The combined rate for C corporations, after accounting for the 15 percent corporate rate and the 20 percent capital gains rate, is 32 percent. The pass-through rate, if the 15 percent business rate does not apply to them, is 33 percent.

A separate rate for pass-throughs in the 25 percent range, such as the House blueprint calls for, could be an agreeable middle ground.

The plan also could be improved by granting all businesses expensing and by moving to a territorial system.

The Trump plan would reduce revenues by between approximately $1 trillion and $2.5 trillion over 10 years, depending on the treatment of pass-through businesses, after accounting for the economic growth it would foster,  according to the Tax Foundation’s analysis.

This is a reasonably-sized tax cut considering revenues are set to exceed their historical average as a share of the economy each year over the next decade.

• A 4 percent surcharge on adjusted gross incomes (AGI) over $5 million.
• A 30 percent minimum tax for AGIs over $1 million (the so-called Buffett rule).
• Limiting the value of itemized deductions to 28 percent.
• Increasing capital gains tax rates.
• Capping the size of Individual Retirement Accounts (IRAs).
• Raising the death tax rate to 65 percent for estates over $1 billion and reducing the exemption amount from $5 million to $3.5 million per person.
• Assessing an exit tax on businesses that invert.

These assorted tax increases combined do not create a tax reform plan that will lessen the impediment the tax code creates for economic growth.

Instead, the Clinton plan would hurt economic growth by reducing incentives for working, saving and investing, and taking risks.

Tax Reform Hinge on Who Wins in November

Tax reform will have a chance of becoming law in 2017 because of the House’s commitment to it.

If Trump becomes president, he and the House can work to meld their plans. The prospects of a strong pro-growth plan in that scenario are high.

If Clinton becomes president, tax reform would become less likely. Instead, Congress would need to stop her desired tax increases, much as they worked against President Barack Obama’s tax hikes for many of his years in office.

That effort would deter time and focus from the primary goal of reforming the nation’s outdated tax code.