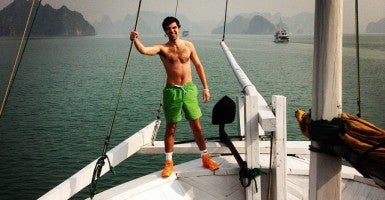 'We can be just as passionate as the next guy,' Rhett Johnson, here on vacation last year on Ha Long Bay in Vietnam, says of young Republicans. (Photo courtesy Rhett Johnson)

RALEIGH, N.C. — An app on his cracked iPhone has directed the new face of the Republican ground game to Currituck Street.

Rhett Johnson parks his SUV stuffed with Chick-fil-A wrappers alongside a curb.

“I can’t do phone calls,” says Johnson, a 21-year-old political science student at North Carolina State University and former trombone scholar. “I’m a happy-go-lucky guy. I’d rather be boots on the ground.”

“I’d rather be boots on the ground,” says @RhettLeeJohnson.

Before he knocks on the first door, Johnson checks his fluffy hair in the car window.

He brushes curly brown strands into and out of place, but this is as good as it’s going to get.

“I haven’t had time to get a haircut since I started doing this,” Johnson says.

Clutching only a clipboard, fliers for Senate candidate Thom Tillis and his phone, Johnson jogs up a hill to the first house, his white quads exposed because he wears short shorts.

“I’m in the best shape of my life,” he says, noting he has gained six pounds of leg muscle since May, when he started out as a volunteer for the North Carolina Republican Party. Because his phone app told him so, Johnson already knows that the owners of these houses are registered Republican.

Based on their voting history, logged in a database on the phone, Johnson knows the homeowners are low-propensity voters who generally vote in presidential elections but not midterms like the one coming up.

If Tillis unseats Sen. Kay Hagan, the Democratic incumbent, credit can go in part to Johnson, the high-socked, high-energy face of the GOP’s newly tech-driven ground game — an art long dominated by Democrats.

“Seeing this liberal wave has emboldened our base,” Johnson says.

Republicans in North Carolina and across the country are copying the all-in, efficient ground game that famously helped President Obama win two elections.

Johnson, elevated to a paid intern, works out of state party headquarters in Raleigh.

The get-out-the-vote effort in Raleigh is a result of Victory 365, a project launched after Republicans lost the presidential race in 2012.

For his shift on this Saturday, Johnson wears a grey and red T-shirt with the Victory 365 logo.

Reince Priebus, chairman of the Republican National Committee, initiated the voter outreach strategy as a way to target elusive groups such as women, young people and Hispanics.

Preibus, campaigning Saturday with Tillis at state party headquarters — the GOP calls it “victory center” — concedes past failures during his speech.

“This is a total revamp of our national party,” Priebus says. “It can’t be where we are a U-Haul trailer of cash for the presidential nominee. We know this will be won right here at the victory center.”

“This is a total revamp of our national party,” says @Reince.

Preibus proceeds to name-drop Rhett Johnson for reaching the homes of more than 10,000 potential voters in recent months, the most of the volunteers, interns and staffers working at party headquarters. Johnson has knocked on more than 10,000 doors in an effort to get Thom Tillis elected. (Photo: Josh Siegel/The Daily Signal)

“It took a lot of time and a lot of data to get that back to our data collector,” Moorman says.

The new phone app, Advantage Mobile, feeds back information from the field to a database managed by county and state party officials at the office.

“We have to do the same as the Democrats; otherwise, what are we doing?” says Moorman, smiling Saturday as 25 of her volunteers at Guilford County Republican Party headquarters take to the streets.

An Afternoon of Knocking

“I really don’t want to share,” the grumpy old man declares, preferring to keep his voting plans to himself.

But Johnson’s pitch is relentlessly upbeat. He often stands on tiptoe as he waits for responses to his questions, as if staying tall will project hope.

Johnson often deals in denial, though. Out of about two dozen homes he visits on this Saturday, only three residents answer his questions.

It feels like a bad trick-or-treat outing. Most people don’t come to the door. “We’ve all been there,” he says, explaining:

You’re busy in the morning. You don’t want to take a survey. I totally understand. You just gotta move on. People are living their lives. I’m just trying to do what I can for the Republican party. That’s all you can ask for. I’m lucky to spend my days outdoors.

“You just gotta move on” if people won’t take a survey, says @RhettLeeJohnson.

For those who do answer, the questions are straightforward.

First, Johnson asks who the person would vote for if the election were that day.

He plugs the reply into his phone.

If the answer is Tillis, Johnson asks when the person will vote. He wants supporters to vote early.

If they plan to do so, the state GOP will mail the voter a reminder.

This day, Johnson already knows the answers to his questions because he is targeting “hard Republicans,” a sought-after demographic captured by the data on his phone.

But normally, he will knock on the doors of people with varied political identities, such as “soft Democrats” or independents.

One respondent bucks the norm.  She answers the door. In pajama pants.

“I’m in the middle of my cereal; it’s going to get yucky,” the woman says, hesitating, before revealing she is undecided about who to elect.

The next respondent better fits the target profile.

Asked who he would vote for, an older man stands on his front porch and replies, “You gotta be kidding me.” On this day, Johnson targets “hard Republicans” such as this man. (Photo: Josh Siegel/The Daily Signal)

After driving 3,500 miles to canvass homes, devoting 25 hours a week to his duties, Johnson isn’t ready for the semester of his life to end.

His shoes have aged.

He’s been chased by a dog.

But the people keep him coming back.

One time, on a hot day, a black couple invited him into their home, Johnson recalls.

They made him bacon and eggs.

The survey said they were Democrats.

“I love talking to everyone,” Johnson says. “I’ve exchanged business cards. I’m not selling anything. I’m just getting your civic opinion.”

When the knocking ends, and the election passes, Johnson’s engagement with the Republican Party will remain.

It will have to.

For all the data he collects about other voters, Johnson is the voter Republicans can’t afford to lose.

Like the phone app he carries, Johnson is the present — and the future. The son of a Texas Republican father and a Massachusetts Democrat mother, he has an evolving political philosophy.

His hometown, in north Raleigh, is changing too. Once mostly farmland, it has become one of the “hottest areas for construction,” Johnson says.

At 21, Johnson — like the college-aged interns he works with — thinks often about the GOP’s direction.

“We can be just as passionate as the next guy,” Johnson says.

“But we have to be open-minded. We want a sound economy. We are concerned about our college and our homes. We’re all just young guys starting our lives. It’s really exciting.”