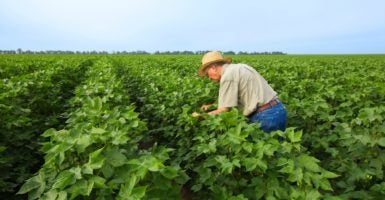 Why is there a special taxpayer-funded safety net to help many farmers with risk, when other businesses manage risk without such federal government intervention? (Photo: Bill Barksdale/Newscom)

During the last farm bill debate in 2013 and 2014, The Heritage Foundation was frequently asked what a free-market alternative to the farm bill would look like. We were listening, and we have just released a major new report that answers that question.

“Farms and Free Enterprise: A Blueprint for Agricultural Policy” provides not just an alternative to the farm bill, but a free-market vision for agricultural policy.

Agricultural policy is much broader than the costly and harmful subsidies that exist in the farm bill. In addition to the subsidies, we analyzed many issues that aren’t usually a focus of the farm bill, such as the Clean Water Act and the Renewable Fuel Standard.

Here’s the free enterprise blueprint at a glance:

Address agricultural programs on their own merits. Before even getting into the substance of agricultural policy, a critical process issue needs to be addressed. The farm bill is really the food stamp bill. At the time of the 2014 farm bill’s passage, the projected costs for food stamps and the nutrition title covered about 80 percent of the farm bill’s costs.

As explained in the report:

Move away from subsidies to address agricultural risk. Agricultural producers, like other businesses, face a wide range of risks. Yet why is there a special taxpayer-funded safety net to help many farmers with risk, when other businesses manage risk without such federal government intervention?

Before even examining the major programs such as the federal crop insurance program and the sugar program, we asked preliminary questions to identify why these programs even existed in the first place. Agricultural producers are well positioned to manage risk and have many private means to do so.

Further, the harm caused by subsidies is far greater than the approximately $15 billion annual cost of the taxpayer-funded safety net. For example, farmers will farm the subsidies. Instead of meeting the needs of the market, farmers will make planting decisions based on how to maximize the subsidies that are being offered to them. This isn’t a criticism of farmers; it is a rational action they take based on the market-distorting incentives created by subsidies.

Congress has gone way beyond providing a taxpayer-funded safety net for agricultural producers. For example, Congress created a major new program called the Agricultural Risk Coverage program in the 2014 farm bill that protects farmers from even minor dips in their expected revenue.

The report does recommend moving away from subsidies, but not all at one time. To help ease the transition, we should move away from these excessive subsidies and move to what most reasonable people would think is in fact a safety net.

Specifically, the report recommends keeping programs that only address deep yield losses (such as losses from disasters). This includes keeping the federal crop insurance program, but getting rid of the revenue-based policies that seek to insulate farmers from the market.

Removing the extensive federal intervention would free farmers to engage in agricultural production without government meddling.

End favorable treatment for biofuels and the Renewable Fuel Standard. The report provides significant detail about how the RFS in particular is very harmful. For example, as highlighted by the report:

The report calls for the repeal of the RFS and eliminating the bioenergy programs in the farm bill, and argues that producers should be allowed to drive alternative fuel innovation.

It explains that policymakers should “use the repeal of the mandate as momen­tum for greater reform in the energy sector. Such future reforms should include a further leveling of the playing field for all energy companies and technologies. Congress should also remove pref­erential treatment for all transportation fuels and technologies.”

Despite the incredible benefits of free trade in agriculture, the United States continues to create protectionist schemes through tariff and nontariff trade barriers. A key recommendation in the report is for the United States to put its own house in order by getting rid of these barriers.

In addition, though, the federal government does have a key role to play in agriculture: It needs to be proactive in seeking to eliminate the barriers that block domestic producers from entering foreign markets.

For example, the United States should make more aggressive demands and offers in World Trade Organization negotiations, and should litigate more agricultural trade barrier cases before the WTO. The United States has been very successful when bringing WTO cases.

The long list of harmful and unnecessary regulations impacting agriculture could take up a book on its own. The report explores many of the key regulatory obstacles such as Clean Water Act, the Endangered Species Act, public lands, and agricultural biotechnology regulation. The recommendations call for significant changes that will reduce this barrage of federal regulations on our nation’s farmers.

“Farms and Free Enterprise: A Blueprint for Agricultural Policy” should serve as a valuable starting point for much-needed public discourse on agricultural policy. At a minimum, it provides a clear choice for legislators when it comes to agricultural reform: maintain the harmful status quo or adopt policies that will free up farmers and ranchers to best meet the food needs of consumers.