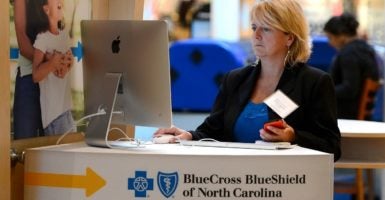 The Obama administration has effectively adopted a policy of putting corporate bailouts of Obamacare insurers ahead of repaying taxpayers. (Photo: Jeff Siner/MCT/Newscom)

At issue is funding for the “transitional reinsurance” program in section 1341 of the Affordable Care Act. In that section, Congress instructed the Department of Health and Human Services to collect $20 billion in “contributions” over three years from private health insurance plans, apportioned by enrollment, and then use those funds to defray the cost to insurers of their most expensive enrollees with Affordable Care Act compliant individual market coverage.

In the same section, Congress also instructed the department to collect “additional contributions” of $5 billion over three years, but specified that those additional contributions “shall be deposited into the general fund of the Treasury of the United States and may not be used for the program established under this section.”

While that latter clause sounds odd, the intent behind it was to improve the legislation’s “score” from the Congressional Budget Office by reimbursing the Treasury for the $5 billion spent in 2010 under another provision of the bill (Section 1102) providing separate reinsurance payments for early retirees in large employer plans.

However, in implementing these provisions, the Obama administration miscalculated and failed to collect the full amounts specified in the law. Furthermore, the administration combined the collections from the two assessments, instead of keeping them separate as Congress had instructed. As the table shows, in 2014 the administration was supposed to collect $10 billion to fund the individual market reinsurance program and an additional $2 billion to reimburse the Treasury, but only collected a total of $9.7 billion.

Thus, the administration effectively adopted a policy of putting corporate bailouts of Obamacare insurers ahead of repaying taxpayers—to the tune of about $4.5 billion.

To be sure, it is the Obama administration, and not the insurers, who perpetrated this heist. But for the Blue Cross and Blue Shield Association to now lobby Congress to keep getting the money puts them in the unseemly (to say the least) position of the guy caught with stolen merchandise demanding that he be allowed to keep his ill-gotten goods because he wasn’t the one who originally stole them.

At this point, members of Congress need to do two things to reassert their institutional authority.

First, they need to tell insurers that Congress is not going to continue to bail them out for their Obamacare losses, nor countenance the executive branch playing accounting games to achieve the same end.

Insurers lobbying for bailouts should be told to instead come back when they are ready to offer Congress constructive assistance in writing workable replacement provisions that don’t need to be propped up with repeated infusions of tax dollars. In the end, that will produce better solutions for the country, their customers, and their bottom lines.

Second, Congress needs to use the appropriations process to force the Department of Health and Human Services to pay back to the Treasury the amounts specified in law.

There is simply no ambiguity in the statutory language stating that those monies “shall be deposited into the general fund of the Treasury of the United States and may not be used for the program established under this section.” If Congress writes into law such an explicit directive, but then lacks the will to enforce it, Congress might as well just hand the president a single blank check to spend tax dollars as he, or she, sees fit and adjourn.

Put bluntly, if Congress fails to aggressively defend its constitutional functions and prerogatives, it will become an institutional doormat for this, and future, presidents.