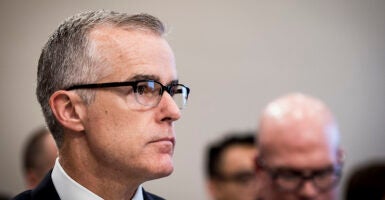 Former FBI Deputy Director Andrew McCabe told a Senate committee on Tuesday that he would not have signed an application for a warrant to surveil a former Trump campaign aide had he known it contained inaccurate information.

“If you knew then what you know now, would you have signed the warrant application in June 2017 against Carter Page?” Senate Judiciary Committee Chairman Lindsey Graham asked McCabe.

A Justice Department inspector general’s report released on Dec. 9, 2019, blasted the FBI over a series of errors and omissions in four applications for Foreign Intelligence Surveillance Act warrants against Carter Page.

The inspector general’s report said that investigators failed to disclose numerous problems with the Steele dossier, which the FBI cited extensively in the FISA applications.

McCabe signed the fourth and final FISA application in June 2017. The Justice Department has deemed that application and another one signed in April 2017 to be invalid because of widespread errors.

Three other officials who signed off on FISA warrants against Page have told the Senate Judiciary Committee that they would not have authorized surveillance against the former Trump aide if they had known about some of the findings in the inspector general’s report.

Former Deputy Attorney Generals Rod Rosenstein and Sally Yates and former FBI Director James Comey have all testified that they would not have approved the warrants.

The inspector general’s report said that FBI investigators failed to verify allegations from former British spy Christopher Steele before using the information in the FISA applications.

Steele alleged in a dossier that the Trump campaign and the Kremlin were part of a “well-developed conspiracy of cooperation” to influence the 2016 election.

The special counsel’s office debunked that allegation in a report released on April 18, 2019.

The inspector general’s report said that the FBI failed to disclose evidence that undercut the credibility of the dossier.

McCabe, who was fired from the FBI in March 2018, told Graham that he was not briefed on the details of an FBI interview with the primary source for Steele, the author of a dossier that the FBI used to obtain its FISA warrants.

The source, Igor Danchenko, told the FBI that information he gave to Steele was based on hearsay and rumor. Steele portrayed the information as verified in the dossier, which is cited extensively in the FBI’s four FISA applications against Page.