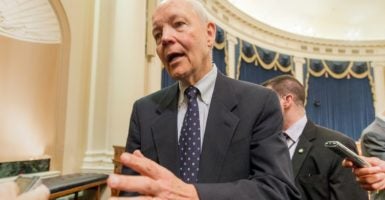 Members of the conservative House Freedom Caucus were furious about Koskinen’s visits with lawmakers who belong to the moderate Tuesday Group or the conservative-leaning Republican Study Committee.

These conservatives have been calling for the top taxman’s impeachment since October.

One of the members who quarterbacked the impeachment effort, Rep. Tim Huelskamp, R-Kan., described the Koskinen tour as tantamount to allowing a defendant to chat up a jury “while the prosecuting attorney is away.”

“You’re going to give the most hated official in the Obama administration a free platform, without testifying under oath, to defend himself and his targeting of conservative groups?” Huelskamp told The Daily Signal. “This is just a charade.”

Conservatives have bickered for months over impeachment with GOP leadership, including House Speaker Paul Ryan, R-Wis. And pessimism was rank among members of the Freedom Caucus after word got out of the top IRS agent’s congressional visit.

“Life on Capitol Hill can’t get any more cynical,” Rep. Dave Brat, R-Va., told The Daily Signal. He blamed centrist Republicans for “asking for testimony, not under oath, that allows someone with a proven track record of obfuscation and destruction of evidence to get a free pass in the media.”

The Freedom Caucus says the IRS commissioner has to go because he obstructed a congressional investigation into the agency’s unfair treatment of conservative groups. Conservatives have slammed leadership for being “too timid to go after corruption” in the past.

The Obama administration has been unwavering in its defense of the beleaguered tax chief. And for his part, Koskinen has described allegations of wrongdoing as “unwarranted” and the articles of impeachment lodged against him as “without merit.”

To force the impeachment issue, the Freedom Caucus employed a parliamentary mechanism known as a privileged resolution from the House floor in April. The tactic triggers a floor vote on impeachment and bypasses a laborious committee process.

Wednesday morning, Ryan said the House will hold a vote next week on whether to impeach Koskinen. But by afternoon, the tax chief was touring Capitol Hill in an effort to sway lawmakers to vote against his impeachment.

A leadership aide told The Daily Signal that Ryan didn’t play a hand in bringing Koskinen to the House, adding that the Republican conference will huddle Sept. 15 to discuss the party’s official position on impeachment.

The meeting will be an open-mic opportunity for conservatives to air their case against Koskinen and to bring other members, some of whom haven’t followed the controversy closely, up to speed.

Though the RSC meeting with Koskinen was cordial, Chairman Bill Flores, R-Texas, told reporters, it was hardly a meet-and-greet. Nearly 40 members met with the tax bureaucrat, grilling him with “pointed questions,” Flores said.

Some members of the RSC, including Oversight Committee Chairman Jason Chaffetz, R-Utah, want to fire Koskinen.

Chaffetz told The Daily Signal on Tuesday that he would “certainly be supportive of” a privileged resolution to force a vote.

But the Utah representative, who first introduced articles of impeachment in October, said that first “we have to get the entirety of our team, aka the Republicans, moving in the right direction.”

Chaffetz’s office didn’t respond to The Daily Signal’s inquiries about who was on the sidelines of the impeachment push or if the Koskinen tour hindered that effort.

The impeachment debate comes as conservatives and GOP leadership are in a standoff over spending levels.

One member of the Freedom Caucus suggested conservatives might be persuaded to soften their stance on Koskinen if the establishment would agree to keep any spending bills from taking flight during the lame-duck session.

”It might very well be that we back off of Koskinen until the first of [next] year,” the lawmaker told The Daily Signal on condition of anonymity, “if you [GOP leaders] do a continuing resolution through March.”

Other members of the Freedom Caucus remain intent on getting their political pound of flesh. The IRS targeting scandal has been a focal point for Republicans since the public first learned in 2013 that the agency put conservative groups under extra scrutiny.

The IRS started flagging and holding up applications for nonprofit status from conservative groups in 2010. Agents specifically targeted applications that included terms such as “tea party,” “patriot,” and “government spending.”

While multiple investigations were underway, President Barrack Obama told Fox News host Bill O’Reilly on Super Bowl Sunday in 2014 that there was “not even a smidgen of corruption” at the IRS.

Conservatives argue that no one at the IRS has been held accountable for the unfair targeting.

Rep. Mick Mulvaney, R-S.C., said he wishes Koskinen would agree to testify before the House Oversight and Government Reform Committee.

“It’d be interesting to see if the song and dance would be different under oath,” he told The Daily Signal.