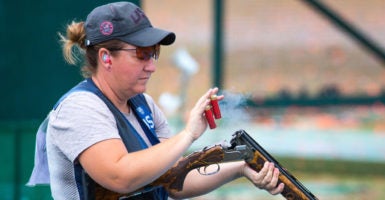 Outside of the gun world, few Americans know about Kimberly Rhode. Ironically, it wasn’t until The Wall Street Journal coined her “The Unknown Olympic Champion” that the general public became curious about what this athlete had achieved.

But at the Rio Olympic Games, Rhode made history, tying a record for the most consecutive medals ever won in back-to-back Olympic Games. There, Rhode won bronze in skeet, a sport where competitors use shotguns to break clay targets that are flown into the air. Her bronze in Rio added to her collection of five Olympic medals, which began in the 1996 Atlanta Olympics when she was just 17 years old.

And she isn’t stopping there: Rhode already announced plans to compete in the 2020 Tokyo Olympics, where she stands to make history as the first male or female to ever medal in seven straight Olympic Games.

Thought you might like to see the back of my 6 #Olympic medals! #Tokyo2020 #stillcantbelieveit @USAShooting @TeamUSA pic.twitter.com/gEkFiaDemH

Even then, Rhode isn’t expecting to land a big sponsor—there’s too much of a stigma attached to her sport, she admits. Rhode says she doesn’t hold a grudge, but also can’t explain why more Americans aren’t interested in hearing her story.

In London, for example, Rhode didn’t realize that she was pregnant when she won gold. When asked why the media didn’t jump to tell her story the way they did when Olympic volleyball player Kerri Walsh Jennings announced she won gold while pregnant, Rhode said:

I can’t really say why people do or choose one story over another, but I was pregnant in London, and I did have a very, very challenging pregnancy. I’m still recovering from that, so I wasn’t 100 percent going into this Olympics. I definitely think it’s a good story.

However inspiring, Rhode, 37, knows her story is also controversial. As a publicly announced supporter of the Republican presidential nominee Donald Trump and a proud member of the National Rifle Association, Rhode isn’t shy about her politics.

“When you look at the gun debate and the Olympics, there definitely is that stigmatism that’s attached to our sport due to all the negative publicity that guns get,” she said.

But there’s more to Rhode—and her sport—than shooting skeets, she explained. “Shooting is actually very family-oriented,” she said. And Rhode said she fears that shooting sports could soon be dead because gun control legislation is “killing our sport.”

The Daily Signal caught up with Rhode to talk about alleged bias against her accomplishments, her support for the Second Amendment, and how she handles being a female in a male-dominated sport. Questions have been edited for clarity.

As as an Olympic athlete who has made history, do you believe that you’ve had the same sponsorship opportunities as other medal winners?
Within my industry, I am very well supported and I appreciate everything that I get. Because I think people forget, Olympians don’t get here on their own. But as far as outside of my industry, I would say no, I don’t think we see very many sponsors. When you look back through the history of shooters, nobody else has either. So I find that kind of interesting when you look at how long shooting has been in the Olympics and how many of the mainstream sponsors of the Olympics have actually sponsored a shooter. So it sounds like you believe there’s some sort of stigma against your sport?
When you look at the gun debate and the Olympics, there definitely is that stigmatism that’s attached to our sport due to all the negative publicity that guns get. So unfortunately I think people have a hard time separating the fact that we are just a sport—that we teach responsibility, discipline, and focus, and we train really hard like all the other athletes.

I jokingly say that all sports matter. Not just shooting or beach volleyball. Every sport is unique and can bring something to the table and that’s really what the Olympics are about—showcasing all the different sports and the amazing talent from all over the world.

Where do you think the stigma comes from?
I think the misconceptions people have of the sport is that shooting is actually very family-oriented. It’s not a sport where you can take your kid and drop him off, and let somebody else spend the time with them. It’s actually a sport that your mother and father and your family has to be very involved in—in teaching responsibility and discipline and focus. It’s very, very family-oriented. You see fathers and sons, mothers and daughters, and mothers and sons out there—whole families shooting together. And I think that’s something that is really wonderful about the sport. It’s also great too that it doesn’t matter your size or your stature. So men and women can truly compete on an equal playing field.

Speaking of equal playing fields, you’ve opened a lot of doors for women to participate in shooting sports, not to mention that you competed in London while you were pregnant—something that men don’t have to think about. Do you consider yourself a feminist?
I’ve never really thought of it that way, but I guess you could call me that. I’m definitely in a more male-dominated sport, and kind of breaking down some of those barriers.

You decided to speak out after the San Bernardino terrorist attack that left 14 people dead and 22 injured. Given the nature of your sport, do you feel a responsibility to speak out about gun violence?
We’re just like everybody else looking in and watching it unfold and obviously, our hearts break for those people and their families. I don’t think there’s any right or wrong way to answer that. When those incidents occur I don’t jump on my phone to call people and be like, this is what I think. Usually I’m getting calls from people to comment on it. In some cases, I’ve stayed out of the conversation, and in other cases like San Bernardino … because my family has some houses near the area, it hit a lot closer to home for me. How do you feel about the most recent calls for more gun control efforts?
The fact that the government would even consider repealing or taking away the Second Amendment is basically the very reason for which it was written. So for me, that is an issue in itself. The [phrase] “right to bear arms,” it’s a right and the right shouldn’t be something voted on. It’s a right.

How have gun control efforts personally impacted you and your sport?
When I look at what [California] Gov. Jerry Brown has passed—he signed six [bills] that he rushed through—and some of them directly affect me. For example, the ammunition one. I average between 500 to 1,000 rounds a day. My sponsor ships me ammo by the pallet because I shoot so much. I won’t be able to do that anymore. Every time I want to purchase ammo, I will have to do a background check and pay for it, which becomes costly when you look at us shooting 500 to 1,000 rounds a day. But, the big thing for me is also traveling with ammo. So, say I go to a competition in Colorado, and I take 200 rounds of ammunition that I purchased in California to Colorado, but I only shoot 100 rounds of it. Well now, I can only bring back something like 30 or 50 shells back into the state of California. So what do I do with the other 50? It becomes very challenging for me in that sense, because ammunition is expensive.

Some might say that’s a small inconvenience to save lives.
But the ammunition that I’m shooting, it’s competition ammunition. It’s what we shoot for clay targets. They aren’t limiting [the law] to any one thing—they’re encompassing it all. All ammunition. These laws that they have passed aren’t going to stop the bad things from happening. If people want to do bad things, they’re going to find ways to do it. Look at Paris, look at some of these instances that have occurred in [places that have] some of the strictest gun control laws in the world. Here in California, we have some of the strictest gun control laws in the United States, but yet we still had San Bernardino … the bad guys aren’t going to follow the law so basically, they’re restricting the law-abiding citizens like me and you.

Do you think gun control efforts will have any effect on the future of your sport?
One of the other things that Gov. Jerry Brown signed into [law] is, you cannot loan a gun to anyone that is not, in my understanding, a blood relative or relative. And if you do [loan it to] a relative, it can only be on occasion. I haven’t gotten into the nitty gritty details of it, but how do you coach kids or teach people if you can’t loan them a gun or shells? How do they go about learning the sport? It’s basically, in a way, killing our sport because who’s going to go in and pay the money to buy all the different stuff and try it to see if they like it? It becomes very challenging to get new people in to try our sport, which affects the pool of people we pull from for our Olympic team and other competitions when we’re competing against the world.