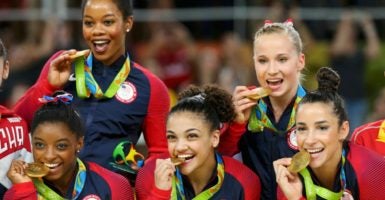 AKUMAL, Mexico—As luck would have it, my family and I have been watching that feast of American greatness called the Olympics while in vacation here in Mexico. Our routine is pretty simple: we do some combination of hitting the beach, visiting Maya ruins or reading, and then have dinner at our hideaway before huddling in front of the TV to watch the games.

Katie Ledecky, Michael Phelps, and the women’s gymnastics team had the five of us at hello.

The only fly in the ointment has come via the news and the realization that politics and race have once again crept up into the Olympics, just as it has in the past. I picked up USA Today at a local supermarket one morning to read that the Final Five is proof of the triumph of “diversity.”

An editorial notes that race relations are at a nadir in America, “as evidenced by the intense battles over illegal immigration, policing and the Black Lives Matter movement.” All true, and the polls are there to prove it. But the editorial goes on to aver, “But diversity also improves America’s competitiveness, from the balance beams of athletics to the board rooms of the world economy.”

A quick check online that night turned up that a lot of people have been saying similar stuff stateside. Over at the Chicago Tribune, Heidi Stevens had this cris de coeur: “We need the Final Five to push back against the daily rhetoric that tells us we’re a divided, crumbling shell of our former selves.” Vox, as usual, got its knickers in a twist, celebrating the team’s diversity while bemoaning that its achievements “won’t calm race relations.”

America, however, has always been diverse and drawn upon this large talent pool to surmount existential moments, just as it did when during the Civil War, when an estimated quarter of the Union Army’s enlisted men were foreign born.

If this is what the writers mean by “diversity”—that we take people from all over the world, turn them into Americans, and benefit from their talents—then of course I am with them.

But the melting pot isn’t what is usually meant when people celebrate diversity.

In fact, as any college freshman can tell you, diversity and the melting pot are rival models of how to organize the country. The enforced affirmation of diversity above all else often detracts from the greater national identity, and thus the unity that makes a team succeed, whether it’s made up of five or 330 million.

The Final Five are indeed a victory for the melting pot—the idea that we all meld together into an American nation, forging out of many different elements one unified, stronger alloy. But their feat is a rebuke of diversity as it is indoctrinated in campuses and policed by all levels of government. The board rooms that USA Today refers to are in fact not diversifying fast enough even for the independent Securities and Exchange Commission, which is considering mandating stricter rules to force companies to disclose plans to make boards more diverse.

“Diversity,” thus, is enforced through means that are inimical to the success of the women’s gymnastics team:

The melting pot cuts against the grain of all this, which is why it is denigrated and discouraged today from kindergarten on. The melting pot, in fact, is what allowed Reisman and Kocian—one Jewish and the other with one likely Czech ancestor—to be undistinguishable Americans. While the Czech immigration into Texas begins in the 1840s, many of the East European immigrants who came in through Ellis Island from 1890 to the 1920s weren’t even considered white at all, and neither of course were Jews for decades. The melting pot got rid of these differences, though of course African-Americans were kept out of it. The answer obviously is to extend one American identity to all, and to minimize our differences.